Dundalk may be travelling to take on Newtown with a four-goal advantage, however, manager Vinny Perth has urged caution as his side take part in the "serious business" of European football.

Perth, in his second stint in charge, is in the very early stages of attempting to return the Lilywhites to their former glories and the project continues with this evening's UEFA Europa Conference League clash against the Welsh side in Oswestry (kick-off 5:45pm).

Far from the glamourous nights of the 2016 and 2020 Europa League group stages, when they faced the likes of Zenit St Petersburg and Arsenal, the manager knows how important building momentum is within the club that won the league five years out of six from 2014 to 2019.

And where better than in European competition away from the League of Ireland campaign, which is now an endeavour to finish as high up the table as possible after a nightmare start to the season?

Victory should be assured with more than a bit to spare in Wales tonight and that will guarantee Perth and his charges another two-legged affair against either Levadia Tallinn of Estonia or Gibraltar’s St Joseph's.

"We are here for serious business," said Perth, speaking ahead of the second leg clash, having secured a 4-0 victory at Oriel Park last Thursday night.

"Europe is always a serious time but we have a focused group and we have a group who want to go and win the game. We know how important it is.

"We won't be underestimating Newtown. They are a good side who are well capable of causing us problems.

"We have to pick the right team, we have to be really strong away from home mentally and we have a bit of work to do as we normally would do, but we are in a good place." 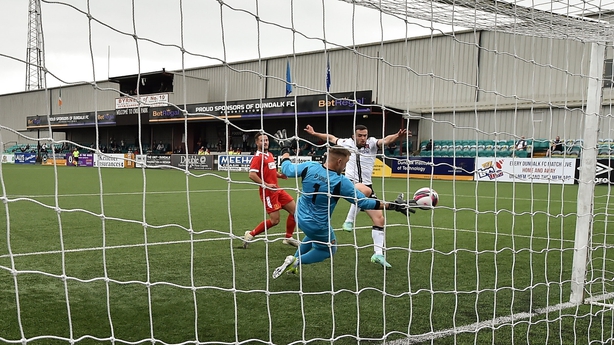 Dundalk are still missing a sizeable chunk of senior players as a result of a Covid situation at the club, and the same squad from Thursday’s win have travelled to Wales.

"We are operating off the same squad as last week, " said Perth. "We are down six senior players at the moment, but we have a nice blend of experience and youth.

"Preparation has been good. We trained well."

Perth has spoken about his return to the club and that he has been happy with some of the performances since taking back the reins at the Co Louth club, but also admitted that some aspects of play have been disappointing.

And he is hoping that another positive result will keep the project pointing in the right direction ahead of Saturday’s Premier Division home tie with Finn Harps, where victory could see them leap over Derry City into sixth place and within three points of joint fourth-placed Drogheda United and Bohemians.

"We have to look after what we do. What I am trying to emphasise to everyone within this club is that the past is the past and we are trying to create a new future for everyone.

"This is part of that, all we are doing is concentrating on ourselves and our own game. We are looking forward to the game, we want to win and hopefully we can do that over the 90 minutes this evening."