Treaty United fought back from two goals down to draw 2-2 with Galway WFC in the Women's National League on Sunday.

Visitors Galway came into the game fifth in the table, while Treaty United were seventh behind Bohemians on goal difference.

After a scoreless first half at Jackman Park, it was Galway who took control early in the second half with goals from Lynsey Mackey four minutes after the break and Meabh De Burca on 68 minutes.

But with defeat on the cards, Treaty United rallied in the final five minutes.

Gillian Keenan pulled a goal back on 86 minutes and just three minutes later, Jenna Slattery was on hand to score the equaliser and earn a point for the Limerick club.

The result lifts Treaty United up to sixth on nine points, three behind Galway who remain fifth, 10 adrift of fourth-placed DLR Waves who beat Cork City 1-0 on Saturday.

Among Saturdays other games, Peamount United went top of the table on goals scored after Ireland international Aine O'Gorman scored a brace to seal a 2-0 win against Bohemians, while third-placed Wexford Youths kept up the chase in the race for the title with a 3-1 win at Athlone Town. 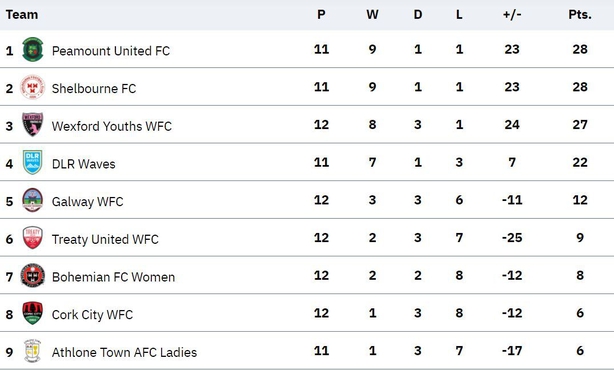