Stephen Kenny is plotting to spoil the Budapest party as Ireland travel to take on Hungary in tonight's international friendly.

The match will be played in front of a crowd of 10-12,000 at the Szusza Ferenc Stadion and will be the final preparation for Marco Rossi’s side, who will then have seven days to plan for their opening Euro 2020 clash.

Hungary have now qualified for back-to-back Euros, having topped their group ahead of eventual winners Portugal in France four years ago, and now the two sides will meet once again at the Puskas Arena in their Group F encounter next Tuesday - the true group of death that also contains France and Germany.

And if tonight’s hosts were looking for a confidence-boosting final farewell ahead of three tough tournament matches, they may be surprised to find their Irish opponents treating the game like a competitive one.

From an Irish perspective, the team might be forgiven for having one eye on their summer sojourn as they work their way through their final 90 minutes of a long and exasperating Covid-affected season.

However, manager Kenny is treating this international window with real intent and has linked it to the triple-header in September.

Upon further scrutiny, there may well be method in Kenny’s madness, as Ireland look to steal a march on the competing nations ahead of the World Cup qualifiers.

The September games come almost instantly once the new season starts in the major leagues in Europe, and should Portugal progress to the latter stages of the tournament, their players will be late back to their clubs and could be coming into the 1 September encounter lacking match fitness and sharpness.

It's still a big ask for Ireland to take something from the group's top seeds, of course, and something that should not affect the other two games as neither Serbia nor Azerbaijan have qualified for the Euros, however, it does show how methodical and focused the Ireland manager is on the task at hand.

Kenny, no doubt, will have been hammering this home throughout the training camp for the past ten days and will be urging his players to come back to pre-season with a spring in their step.

The training camp in Spain has really been the first time that Kenny has had time to work with the squad on his style and concepts and again, there are signs that things are being worked on that will improve the team’s performances on the pitch.

"It shows we can take things from the training ground to fruition," said Kenny, speaking after the Qatar game in March, following James McClean’s goal, which quite clearly came from a pre-rehearsed routine.

Kenny revealed that Troy Parrott’s second strike against Andorra had similar roots, as he said that they had been working on the Spurs striker arriving late to challenge at the back post - likewise with Jason Knight’s goal.

The manager is also taking tactics from the very best, as he explained how he is looking for his players to work balls into the box in the style of the PFA Players' Player of the Year Kevin De Bruyne.

"I’m very clear in the team I want to create, that I want to represent Ireland," said Kenny, speaking at the pre-match press conference.

"For example, the work on the training ground. Troy Parrott’s second, his header. He probably scored that goal eight times in training before he scored it in the match.

"We’ve been working on the whole concept… the De Bruyne cross for example. Goals scored in central positions from wide areas, crosses and traditional headed finishes are much less than say James McClean and Ronan Curtis working to set the cross up for Conor Hourihane from that narrow angle inside the box.

The manager was also quick to admit that his side were not getting carried away following their first victory, in a game they were expected to win against Andorra, but there is no doubt that it will have worked wonders for team morale and confidence going into tonight’s game.

Kenny will want to reward the players who delivered that first win of his tenure and will ask them to maintain the momentum to take into the summer break and beyond to the next three games of this five-game approach.

"The season is only a week old coming into September so, really, this is five games in a row," explained Kenny.

"That's how I compartmentalise it; two games now, the players have a couple of weeks off and they are back in training.

"So really, the first of September they are only back a week, and they are into international camp.

"They will all probably get equal minutes at their clubs so someone playing regularly for their club is more of a factor in October, November. So this camp is important in that regard."

Gavin Bazunu looks like he will hold onto the number one jersey for tonight’s game as Kenny admitted that he wanted the former Shamrock Rovers man to play in front of a crowd ahead of the Portugal game, while he also stated that he wants a degree of continuity in the side.

There will be changes, but not wholesale, according to the manager and it will be interesting to see how he sets up his midfield tonight following a poor display of passing in the first half of the Andorra game, which resulted in a performance that was lacking cohesion.

It took 36 minutes for Ireland to put together a sustained string of passing in that first half and Kenny will, no doubt, have been livid with the respective players that the fundamentals of the game were not being employed.

That may have been fixed on the training ground or perhaps the manager will look to someone like Harry Arter to sit in and dictate play, while he also has the option of asking Jason Knight to play a central role following his excellent display out on the right last week, while Jayson Molumby is another firm favourite of the manager.

At the back, Matt Doherty will get more experience in the international side in Seamus Coleman’s absence, while James McClean may again be asked to fill the left-back role to test his defensive nous against a far superior opposition.

Kenny, of course, has the option of going with three at the back, which could see Shane Duffy sit in alongside John Egan and Dara O’Shea.

As options become more plentiful for Kenny, he will need to get more ruthless with his selection and this may become apparent in the forward line tonight as James Collins and Ronan Curtis could miss out following a largely ineffective performance against Andorra, while both were guilty of missing very scoreable chances.

Expect to see Adam Idah line up alongside Troy Parrott for what could be a partnership of the future, while the manager may also want a better look at Jamie McGrath at this level following his cameo appearance on Thursday night.

Daryl Horgan is another who will surely be rewarded for his performance against Andorra, which also brought his first international goal. The former Dundalk man has rarely put a foot wrong when called upon during this Kenny era.

Shamrock Rovers’ attacking midfielder Danny Mandroiu, Andrew Omobamidele from Norwich City and Rotherham’s Chiedozie Ogbene could both be in line to make their international debuts, however, they will all most likely start on the bench tonight.

Likewise, Kenny will be keen to cap Caoimhin Kelleher, and the Liverpool stopper may be introduced at some stage during the second half. 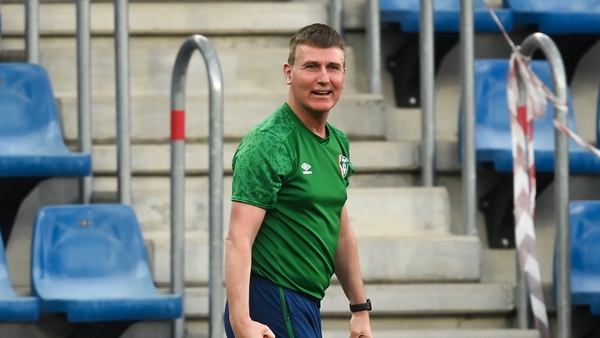