Ireland survived a huge scare to come from behind and beat Andorra 4-1 to secure Stephen Kenny's first victory since taking over as the national team manager.

After 11 games without a victory, Ireland’s first-half performance lacked any sort of quality, and then seven minutes into the second half they found themselves with an uphill task at the mountainous venue as the home side took the lead through Marc Vales.

Troy Parrott saved the team and the manager’s blushes with two goals inside three minutes around the 60-minute mark, before two late goals from Jason Knight and Daryl Horgan made it lucky number 12 for the manager.

A real scrappy start to the game for Ireland with little cohesive play on offer as the new-look team tried to get used to each other and the carpet-like artificial grass surface.

A stop-start opening 20 minutes with little of note from either side with Andorra happy to sit deep, while Ireland looked to vary it by going long and direct at times – without any success.

Ireland's best route to goal appeared to be coming from a range of set-pieces, however, the delivery was lacking, with little quality arriving into the penalty area.

Aside from a moment of excitement inside the box for James Collins in the opening two minutes, Ireland were unable to put any sort of pressure on Iker Alvarez’s goal, and it wasn’t until the 27th minute before a moment of attacking intent arrived from the right with Matt Doherty dancing through a host of players.

The Spurs man worked the ball along the edge of the box following his mazy run, but again there was no real support and Andorra dealt with the threat without any real concern. 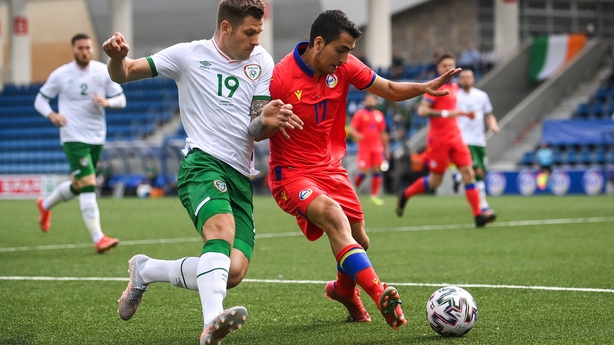 The home side were keeping the referee busy with the amount of niggly fouls that were preventing any sort of tempo building, and a 31st-minute free into the box almost proved perfect for the arriving Ronan Curtis, however, his path was blocked just as he attempted to attack the inviting Hourihane delivery.

Hourihane’s set-piece ball appeared the best route to goal and another in the 33rd minute led to a Josh Cullen shot on the edge of the box, however, the Anderlecht man was unable to work the keeper.

The home side worked a decent chance a minute later as Ricard Fernández found himself in space and was allowed to run at the Irish goal. The forward opted to shoot early from distance, however, it was a scuffed effort and did not threaten.

It took 36 minutes for Ireland to finally string a composed passage of passes together as the ball was moved with intent from right to left and back again.

Finally, a perfect delivery was sent in from the right by Jason Knight, which found Collins arriving unmarked at the back post, but the striker was unable to direct his header on target from no more than six yards out - the new Cardiff City man should have hit the target at the very least.

James Collins has the best chance of the game but can't guide his header goalwards after some good build-up play.
Ireland warming to their task now#androi #rtesoccer https://t.co/fyvZnGiXQF pic.twitter.com/sXUXbaRa4o

And that was as good as it got in the opening 45 minutes, as Ireland’s goalscoring woes continued with Kenny’s side unable to take control of a game against a side ranked 158th in the world.

Three minutes into the second half, Parrot was upended in the box, however, the referee waved away the penalty appeal as Max Llovera was given the benefit of the doubt as he took down the Irish forward accidently, attempting to get back to his feet.

And it was better from Ireland in the opening minutes as Curtis managed to send a fine ball in from the left in the 50th minute but the cross proved just too high for the unmarked Collins.

Eventually, the deadlock was broken in the 52nd minute, but it was Andorra who took the lead as Vales rose unmarked to head home.

A free-kick was whipped in from just inside the Ireland half and John Egan appeared to lose his man as Vales powered home his header to hand Andorra an unlikely lead.

Ireland looked to react, but it was the home side who were buoyed by the goal and worked another chance two minutes later as Doherty’s loose pass was blocked, allowing Fernandez to aim at goal.

A well-hit effort looked to be on target but Egan managed to get across and deflect the shot over the bar.

Ireland were only behind for five minutes before Parrott grabbed the equaliser to secure his first senior goal.

And it was the composure that had been lacking throughout the performance that arrived at the feet of the young Dubliner who danced along the edge of the box before calmly slamming the ball back across the goal and into the far corner.

Ireland should have taken the lead a minute later as Parrott again burst into the box, this time the ball helped into his path from the right, and unselfishly, he helped the ball into the path of the unmarked Curtis, but somehow the Portsmouth man sliced his effort wide.

But Parrott was starting to shine, and he added his and Ireland’s second in three minutes, as a teasing ball was worked in from the left by Hourihane and the young striker rose above his man at the back post to guide a downward header home.

Adam Idah and Daryl Horgan joined Parrott in attack as the ineffective Collins and Curtis departed.

Ireland were a completely different proposition at this stage, the horror-show first half starting to fade as the side pushed towards the manager’s first victory.

Jamie McGrath was sent on to make his international debut in the 82nd minute, however, it was another sub, Horgan, who conjured up the goal that settled the result after picking up a ball out on the left following a short throw-in.

The former Dundalk man whipped a perfect ball into the six-yard box, which found the arriving Knight with the simplest of tasks to help the ball home for Ireland’s third.

Horgan would then turn goal-scorer as he bagged the fourth following a fine ball into the box from Knight. The Galway man had to stretch to reach the ball but once the diving header connected, there was never a doubt.

Finally, the manager could sit back and enjoy the few added minutes at the end as his long, long wait for a maiden victory finally came, albeit the performance will still attract a lot of criticism. 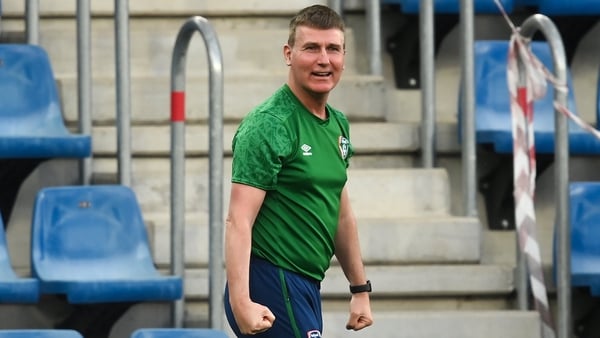