England's Football Association has launched a formal inquiry into the role played by Premier League clubs in the attempt to create a breakaway European Super League and the Premier League has said the clubs will be held to account.

But after 48 hours of intense protests and criticism, which continues to reverberate through English football, the Premier League clubs withdrew from the project last week.

"Last week, we started an official inquiry into the formation of the European Super League and the involvement of the six English clubs," an FA spokesperson said on Monday.

"We wrote to all of the clubs to formally request all relevant information and evidence regarding their participation. Once we have the required information, we will consider what appropriate steps to take. Clearly what happened was unacceptable and could have caused great harm to clubs at every level of English football," the spokesperson added.

The Premier League said it was also looking into the behaviour of the six clubs.

"We are determined to establish the truth of what happened and hold those clubs accountable for their decisions and actions," it said in a statement.

The league added that it was tightening up its regulations to stop any future attempt at a breakaway structure.

A new "Owners' Charter" will be introduced as part of the league's governance - all club owners will be required to sign up "committing them to the core principles of the Premier League". 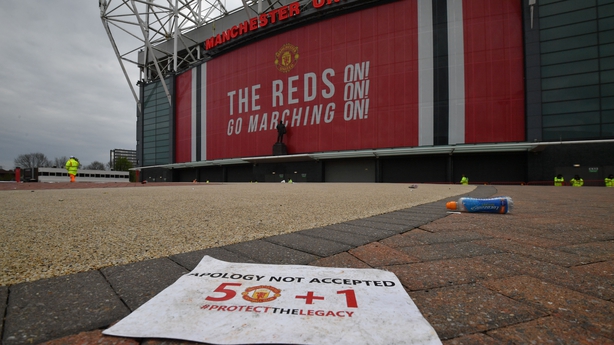 "Breaches of these rules and the Charter will be subject to significant sanctions," the league added.

The UK government has also launched a review of the game to be headed by former sports minister Tracey Crouch and the Premier League said it was in talks with the government "to bring in appropriate legislation to protect football’s open pyramid, principles of sporting merit and the integrity of the football community".

Manchester United fans on Sunday clashed with police and invaded the pitch before their scheduled Premier League match against Liverpool which was postponed as a result.

There have also been protests at Chelsea and Arsenal games since the Super League plan was announced.

"The fans have played a vital and impactful role in helping to stop the European Super League from happening, and we understand their frustrations," the FA spokesperson said.

"However, we cannot condone the violent and criminal behaviour that took place before the scheduled Manchester United vs Liverpool match, which The FA is now investigating."

The Premier League urged any protests to remain peaceful.

"We are committed to maintaining close dialogue with supporters and their representatives, as we work with

The FA and Government to identify solutions, but ask that all protests are peaceful," it said.

"The actions of a minority of those present at Old Trafford on Sunday have no justification and will be investigated by the Premier League and The FA as well as by the Greater Manchester Police.

"The actions of a few clubs cannot be allowed to create such division and disruption."

The Super League argued it would increase revenues to the top clubs and allow them to distribute more money to the rest of the game.

However, the sport’s governing bodies, other teams and fan organisations say it would increase the power and wealth of the elite clubs and the closed structure of the league goes against European football's long-standing model.

Unlike Europe’s elite Champions League competition, where teams have to qualify through their domestic leagues, the founding Super League teams would guarantee themselves a place in the new competition every year.