Manchester United has said that the club intends to sanction any of supporters involved in "criminal activity" during protests at Old Trafford.

In a statement addressing Sunday's events which culminated in the postponement of their Premier League fixture against Liverpool, Manchester United also rejected claims that club staff opened gates to allow protestors inside Old Trafford and added that entry was gained by illegal means.

"Following events yesterday, while many fans wanted to exercise their right to protest and express their opinion peacefully, some were intent on disrupting the team's preparation and the game itself, as evidenced by activity at the Lowry Hotel and at the stadium," the club said.

"Reports in mainstream and social media that protesters were able to access the stadium and pitch via a gate opened by club staff are completely incorrect.

"After breaking through barriers and security on the forecourt, some protestors climbed the gates at the end of the Munich tunnel, then forced access to a side door in the stand, before opening an external door that let others through to the concourse area and the pitch.

"A second breach occurred when a protestor smashed the door of a disability access lift, enabling a group to enter the stand.

"The majority of our fans have and will condemn criminal damage, along with any violence towards club staff, police or other fans, and these now become a police matter.

"The club has no desire to see peaceful protestors punished, but will work with the police to identify those involved in criminal activity, and will also issue its own sanctions to any season ticket holder or member identified, per the published sanctions policy.

"Information on the rescheduling of the game and any possible implication on other fixtures will be announced after discussion and agreement with the Premier League.

"We remain committed to dialogue and engagement with our fans through the Fans Forum and other appropriate channels." 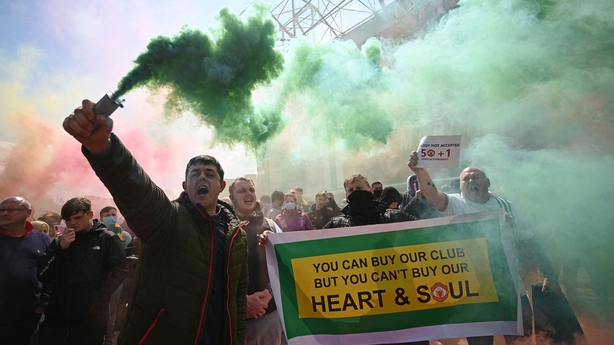 The Manchester United Supporters' Trust has written an open letter to co-chairman Joel Glazer urging the club owners to engage in fan consultation to avoid a repeat of the scenes at Old Trafford on Sunday.

MUST said they did not want to stage further protests, like the one which caused the postponement of the home match with Liverpool, and outlined a way forward with a four-point plan.

"Let's be very clear that no one wants what happened at Old Trafford yesterday to be a regular event," said the letter.

"What happened was the culmination of 16 years in which your family's ownership of the club has driven us into debt and decline, and we have felt ever more sidelined and ignored.

"After 16 years not one member of the Glazer family has ever had so much as a conversation with us, the club's Supporters' Trust.

"Yesterday, that frustration reached boiling point. We support the right of fans to protest lawfully and, although we did not personally witness any such acts, of course we do not condone any acts of violence.

"None of us want this to continue. We all have better things to do. So we need to find a way forward."

The plan asks for engagement in the Government's fan-led review of football governance, the appointment of independent directors to the board to protect the interests of the football club, work with MUST and supporters on a fan share scheme and consultation with season ticket holders on significant changes at the club.

MUST have asked for a public and written response by Friday.

"This is the only way to move this issue on. We strongly suggest you take it," concluded the letter.