Boss Pep Guardiola urged Manchester City to focus on the Premier League title chase after insisting their controversial chapter with the Super League is closed.

Phil Foden's masterclass saw the midfielder inspire the leaders to a 2-1 victory after he started their comeback at Aston Villa.

Rodri headed in the winner to cancel out John McGinn’s opener after 20 seconds.

John Stones was sent off just before the break but Matt Cash collected two bookings in two second-half minutes for fouls on Foden to end Villa’s hopes of a recovery.

City need eight points from their final five games to reclaim the title after spending the start of the week performing an embarrassing U-turn and bailing out of the Super League.

"It’s a closed chapter, as a club we accept and learn and focus on the reason why we are here. We are so close," he said, with City 11 points clear at the top.

"They (the owners) don’t need to apologise (to me), I know them, I know how they are. It’s a chapter which is over.

"Losing today, the last games would have been dangerous because (Manchester) United are in top form.

"When you arrive in the last five games depending just on yourselves it’s a good credit. We know exactly what we need – play like today.

"After two defeats against Leeds and Chelsea we know how important it was.

"There was a lot of adversity, it was not the best of starts but we recovered and came back incredibly well, not just with the two goals but the way we played. It was a hugely important victory for us." 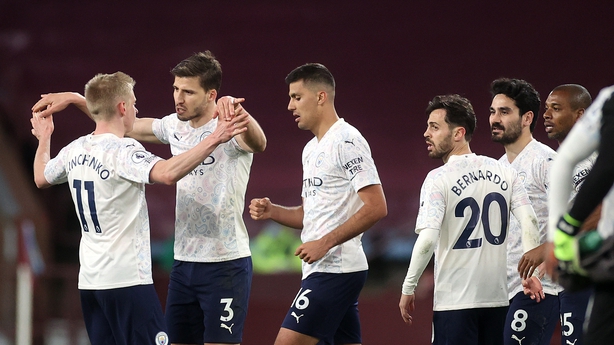 Guardiola also provided an update on Kevin De Bruyne’s fitness ahead of Sunday’s Carabao Cup final with Tottenham with the midfielder missing with an ankle injury.

He said: "It was less (damage) than expected and yesterday he felt much better. We’ll see after tomorrow’s training. If he’s not ready for this final maybe he will be ready for the semi-final in the Champions League (against PSG)."

City fell behind after just 20 seconds when Stones failed to cut out Tyrone Mings’ free-kick and Ollie Watkins crossed for McGinn to steer in.

Yet the visitors took control soon after and England midfielder Foden levelled after 22 minutes, finishing off a sweeping move which started from Ederson in goal.

Rodri then put them 2-1 ahead, glancing in Bernardo Silva’s cross ahead of Emi Martinez five minutes before the break.

Stones was the sent off for a late challenge on Jacob Ramsey after referee Peter Bankes, having initially given him a yellow card, changed his decision when he viewed the pitchside monitor. The England defender is now banned for Sunday’s Carabao Cup final.

City controlled the second half – never allowing Villa to threaten – and they were aided when Cash was sent off for two quickfire fouls on Foden.

"Cashy was harshly done for the first yellow card but it was a stupid decision from him for a second yellow which was well deserved," said boss Dean Smith with Villa 11th.

"He’ll be down and will be down after the earful he got off me in the dressing room afterwards. We won’t have many better chances of beating a team as good as Manchester City.

"We had a great start to the game, we talked about playing balls in behind their full-backs. Then, to be fair, I was stood there watching some wonderful passing and moving from Manchester City.

"But the two goals are what disappointed me the most, if Manchester City are cutting us open with one or two-touch passing and scoring excellent goals it’s a little bit easier to stomach."