Dundalk's rocky start to the season has continued with news breaking this morning that team manager Shane Keegan has walked away from the club ahead of their SSE Airtricity League Premier Division clash with St Patrick's Athletic at Oriel Park tonight.

The Laois man was appointed as the top man at the start of the season after the club made a decision to demote Filippo Giovagnoli from head coach to coach.

The Italian still remained in charge of all affairs at the Co Louth club with Keegan's input in first-team matters thought to be extremely limited.

The former Galway United boss is now understood to have walked away from Dundalk, having initially come to the club as opposition analyst under Giovagnoli's predecessor Vinny Perth ahead of the 2020 season.

Keegan could not be contacted for comment but a statement from the club is expected to confirm his departure later on Saturday.

Having taken just one point from their opening four league matches - the club's joint worst start to a top-flight campaign - pressure had been growing on the management team and club chairman Bill Hulsizer, with a petition set up by fans this week calling for him to step down.

Speaking to the media on Thursday, Keegan said he felt the management team still had the confidence of club owners PEAK6 but admitted that Dundalk would need to take at least seven points from the three games in a week which starts tonight with the visit of table topping St Patrick's Athletic to Oriel Park.

"I feel we have the confidence of the club because we're still in our positions," he said.

"I would assume that as soon as that confidence isn't there that won't be the case and that's the reason I'd say that, yes, we still have the confidence of the club but in any realistic situation if you go through a prolonged period of poor results then there are going to be questions asked and we are verging on prolonged at this stage so we do absolutely have to get it right.

"It's what three games in seven days?

"There's no doubt we absolutely have to get it right over those three games in those seven days or those questions will grow louder. That's human nature and it's only to be expected. I don't think any manager or any management team would expect any different," he said.

The game against St Pat's will be broadcast on WATCHLOI with kick-off at 6pm. 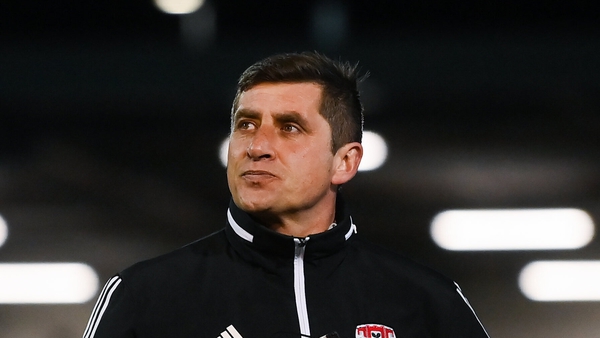