Carlo Ancelotti insists Everton are still in the fight for a place in Europe despite letting two points slip in a goalless draw at Brighton.

The Toffees felt the absence of Dominic Calvert-Lewin up front and managed just one shot on target during the game, which came in the 71st minute.

"Of course, it's more difficult now, the five, but it is a point," Ancelotti admitted after the match.

"It is a point which through good team spirit, although of course with the ball we could do better, we had difficulties to build up from the back, we missed a lot of passes.

"We were not able to reach our strikers with efficiency.

"I think that we are still in the fight but like I said it is more difficult. But now in the next eight games that we have to play, there's a lot to play (for) and teams really close to us and the fight with us, we are still there.

"Of course it is a difficult moment because we have a lot of players out but I hope to recover some players for Friday and fight against Tottenham."

With an already injury-hit squad, it was another blow for Ancelotti when Yerry Mina was forced off just before the hour mark. 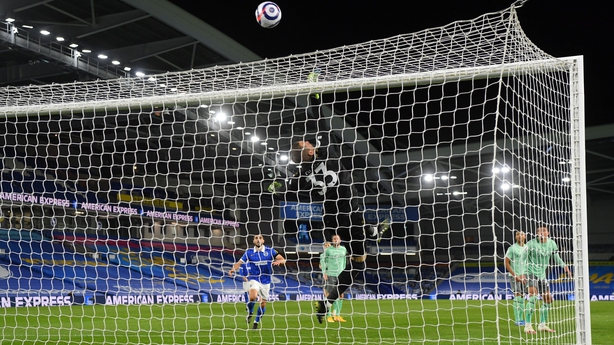 "Yerry Mina had a muscle problem on his abductor and he will not be available for a few weeks I think," the Toffees boss said, also confirming that midfielder Jean-Philippe Gbamin will not feature again this season.

In the battle to avoid the drop, Brighton climbed above Burnley into 15th and are now seven points clear of 18th-placed Fulham, although manager Graham Potter is adamant his club are not safe yet.

"No, there's a lot of work to be done, while it's mathematically possible that anything can happen, we keep working, no-one's going to give up in this league, we know that for sure because as you can see there's lots of good teams able to win and we have to keep fighting," the Brighton manager said.

Reflecting on the game itself, he added: "(A) little bit of frustration but I think overall I'd rather focus on a lot of the good things that we did.

"I thought we had a good intent, I thought we were the team that was closest to winning. I thought we lacked a little bit in the final third in terms of decision and execution.

"Also, I thought Everton defended well when they had to, they had four centre-backs, two full-backs, not easy to break down, and then also you've got the fact that they've got some good attacking players that with big spaces can really hurt you, and we just had to not (give away) too many chances at all.