Everton were unable to keep the pressure on local rivals Liverpool, letting two points slip in the fight for the European places with a lacklustre goalless draw at Brighton.

The Toffees felt the absence of Dominic Calvert-Lewin up front and managed just one shot on target during the game, which came in the 71st minute.

The result leaves Everton eighth, four points behind sixth-placed Liverpool and seven behind West Ham in fourth. Even seventh place might not be enough for a Europa League spot.

In the battle to avoid the drop, Brighton climbed above Burnley into 15th and are now seven points clear of 18th-placed Fulham.

Despite having been previously impressive on the road this season, with 29 points from their 14 away fixtures – and their previous 10 away league matches have featured seven wins and only one loss – the Toffees struggled to impose themselves at the Amex Stadium. 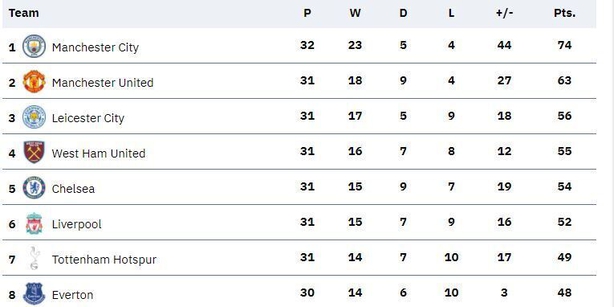 Inside the first 10 minutes Brighton had the majority of the attacking possession, with Jakub Moder having the first opportunity of the game, dragging a shot wide from 20 yards.

The game livened up, with Everton and Brighton having good opportunities a few minutes apart around the half-hour mark.

First, Republic of Ireland captain Seamus Coleman drove down the right before crossing for Tom Davies, but he mistimed his header, sending the ball well wide of the goal.

The hosts then came close at the other end with Leandro Trossard finding Neal Maupay, only for his shot to be deflected just wide of the goal by Yerry Mina.

Yves Bissouma then tried his luck at the spectacular. With his back to goal at the side of the penalty area, the 24-year-old attempted an overhead kick, but it fell onto the roof of Robin Olsen's net.

With the game looking to be petering out for a draw, Everton had little to call on, with an inexperienced bench with just 152 Premier League appearances between them, of which 150 belong to Alex Iwobi.

Iwobi did not have long to wait to make his appearance, coming on in the 58th minute after another injury, to Mina, forced Carlo Ancelotti into a substitution.

Moder had another opportunity, this time from a corner by Pascal Gross which fell to the Poland international at the edge of the area. He struck the ball well and it went narrowly over the bar.

With just over 10 minutes remaining in the game, Olsen was forced to tip Lewis Dunk’s looping header over the bar, with the home side pushing for a winner.

Brighton continued to pile on the pressure – Trossard had a free-kick deflected behind off the wall, and the following corner almost fell for Danny Welbeck, with Everton struggling to clear.

Despite the home side’s dominance, Everton came close to claiming all three points with the final move of normal time, only for Iwobi to fire marginally over the bar.