Republic of Ireland boss Vera Pauw urged her side to keep working and "the luck will come" after Sunday evening's 1-0 loss to Belgium in Brussels.

Tine de Caigny's 14th-minute strike settled it at the King Baudouin Stadium but Ireland were unfortunate not to get a draw against vaunted opponents.

Following on from Thursday's narrow defeat to Denmark – ranked 14th in the world and fancied by Pauw as one of the favourites to win the Euros – it's been an encouraging window for Ireland.

With the World Cup qualification draw to be made at the end of this month, the Dutchwoman is convinced they are close to reaching the next level.

"It's just a shame we're not getting rewarded because I think we played better than the last time [against Denmark].

"We started really well but then we gave it away and we were running after them, but then we picked it up again and in the second half we pressed even better than against Denmark. We should have scored three goals.

"We're ranked 32 and they're ranked 17th in the world. They won their [European Champonship qualification group], they are going to the Euros, so we're so close." 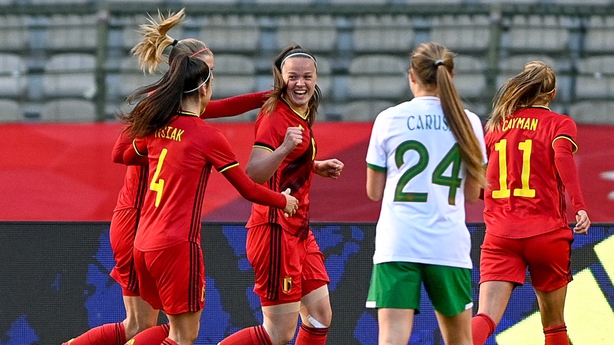 Pauw made six changes to her team for the test in Brussels, handing a debut to Alli Murphy and a first start to Kyra Carusa.

Teenagers Emily Whelan and Ellen Molloy – both rising talents in the Women's National League with Shelbourne and Wexford respectively – also impressed off the bench to offer more evidence that Pauw is cultivating genuine depth in the squad.

The 58-year-old said: "I'm most of all proud of the players who were thrown into the depths, took their chance and did a really good job.

"I'm so proud of my staff, of how everybody works to get those players to a higher level. They've made life difficult for this coach, which is good!

"We need to score, that is it. It's the most difficult last part but it is the last part because the rest will develop if we start to score.

"All the work we've put in, all the individual video analysis that we send to them,  to get feedback, seeing the next game, again getting feedback, it's not for nothing. You can see that every single player in this group grows."

Ireland will take a breather now and wait to see who they draw in the World Cup qualifiers.

"We're going to discuss everything, evaluate, give individual programmes, have good contact with all the clubs and see where we can get this little extra," Pauw added.

"If we start to score then we are there. Belgium are a very good side and Denmark is one of the top sides [going to the Euros], you will see. They have world class players.