Stephen Kenny's winless run continued in Hungary as Ireland were held to a 1-1 draw by Qatar in tonight’s international friendly encounter.

The experienced Irish unit, which saw eight changes to the side that were beaten by Luxembourg on Saturday, enjoyed the perfect start as James McClean opened the scoring after four minutes.

In an evenly matched opening period, Qatar had chances to draw level and had a penalty downgraded to a free-kick, but Ireland maintained their lead at half-time.

However, the hosts did restore parity two minutes after the break when Mohammed Muntari crashed a shot past Ireland keeper Gavin Bazunu from the edge of the box.

Both sides had chances to win the game, but in truth, the draw was probably a fair result, which means that Ireland have now gone 11 games without a victory since the new manager took charge.

The new-look Ireland XI started the game on the front foot and created a fine chance within the opening two minutes as Jeff Hendrick's through ball found Shane Long racing through. Qatar could only half-clear the danger and the ball dropped to Hendrick on the edge of the box, but his shot lacked power and direction. 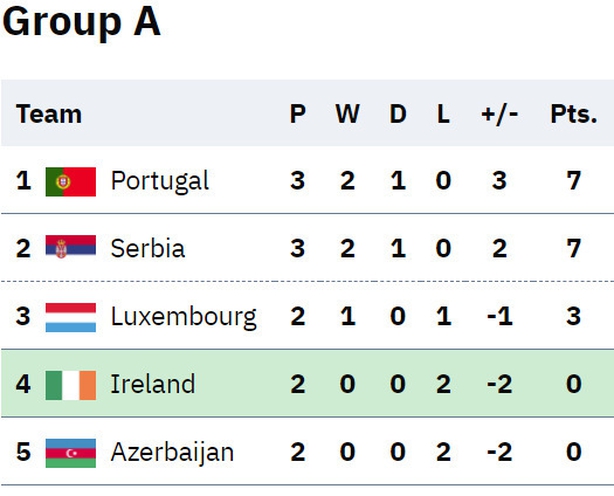 But Ireland's bright start was rewarded after just four minutes when a fine move between Seamus Coleman, Daryl Horgan and Robbie Brady saw the Burnley man’s shot was deflected wide.

From the resulting set-piece, a well-worked corner, that must have come straight from the training ground, resulted in Ireland taking an early lead.

Robbie Brady left his position on the near post to play a one-two with Daryl Horgan who then placed the ball towards the penalty spot behind the pack of players.

McClean came onto the ball perfectly and made sure to work his effort on target, and while it took a nick off Pedro Miguel Ró-Ró to take it past the keeper, the goal will be given to the Derry native. 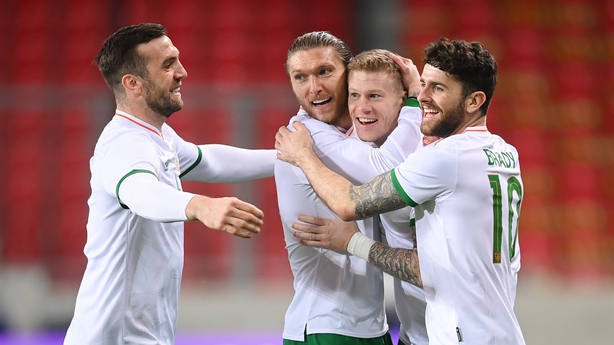 Qatar looked like they were back in the game just two minutes later, as the referee pointed to the spot as Gavin Bazunu was adjudged to have taken Ró-Ró down as he lifted the ball over the advancing keeper.

The first contact – if there was even any contact – came outside the box and the referee was advised to downgrade the decision to a free on the edge of the box. A yellow card for the former Shamrock Rovers keeper the only consequence as the free cannoned off the wall.

Bazunu was then forced to make a fine point-blank save after Abdelkarim Hassan helped the ball onto striker Almoez Ali. It would not have counted, however, as Ali had strayed just offside.

In the 14th minute, Long raced onto a long ball down the right flank and slapped a decent ball across the face where Bassam Al-Rawi almost turned it into his own net, forcing a fine save by the keeper.

Five minutes later, Qatar were growing into the game and Ró-Ró whipped a delightful ball in from the right flank, and with Ali arriving at the near post, he really should have tested the keeper, but flashed his mis-timed effort wide.

Robbie Brady’s injury woes continue to hamper his career and the Dubliner departed in the 21st minute, replaced by teenage striker Troy Parrott.

Long then had a chance to double the lead after running onto a great ball from Christie who was in an advanced position up the right flank. The Bournemouth forward looked to clip it past the keeper first time, however, Saad Al-Sheeb got a strong right hand on the ball to make a good save.

Qatar continued to push and Hassan Al-Haydos tried his luck in the 32nd minute with a snap-shot from out on the right, but Bazunu had it covered.

The Ireland keeper then made a mistake, playing out a short ball which was intercepted by Ali, however, Shane Duffy was on hand to bump the forward off the ball and see out the danger.

Another attack saw Bazunu come close to handling the ball outside the box as he came to dominate his penalty box, and had it been the case, he would surely have been sent off as he was already on a yellow card from an earlier infringement.

Then just before half-time, Ali was played in after a stray Horgan pass was cut out. Duffy did enough to halt the forward’s progress, before Bazunu swept up the danger as Ireland made it to half-time with their noses in front. 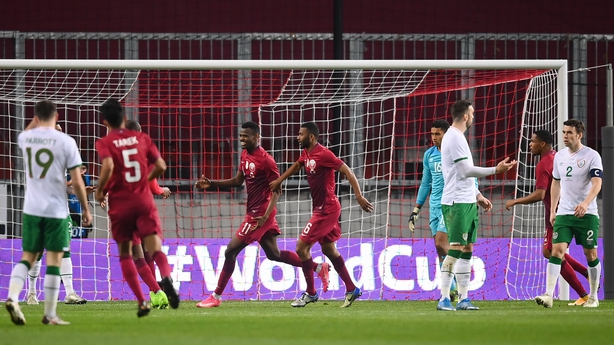 But Kenny’s side were caught cold just after the break as Ali raced from the half-way line before rolling the ball into the path of Muntari who took one touch, spun and smashed the ball past Bazunu with neither Jayson Molumby nor Seamus Coleman able to close the ball down.

The fine right-footed effort, not too dissimilar from Luxembourg’s goal on Saturday, saw the Irish keeper again beaten by a fine strike from the edge of the box.

In the 50th minute, Ireland looked to hit back straight away as a fine move up the right saw Coleman, Christie and Molumby link up. The ball finally sat up perfectly to be hit by the arriving Nottingham Forest defender, but it was on his weaker left foot and he could only drag his shot goalwards.

Qatar were intent on pushing forward whenever the opportunity arose and Al-Haydos had another look at goal in the 60th minute, but his well-hit effort was straight at Bazunu and the keeper saved well.

Into the final third, and while both sides were pushing forward, the quality disappeared from the game resulting in a dearth of goalmouth action; a Callum Robinson effort the best that Ireland could muster, but it was saved at the near post.

Then in the 83rd minute, Qatar had a chance to snatch the win as Ró-Ró slipped a fine ball back for the arriving Muntari, but he blasted his effort over the bar.

Ireland also had a chance to win it at the death as the keeper flapped at a cross, allowing Robinson to take a touch and take aim, however, the West Brom man snatched at the shot with a wall of defenders looking to block the effort, and it was dragged wide.

Then into the final minute of added time, a hopeful ball was whipped towards the back post, which fell perfectly on the head of substitute Josh Cullen.

The Anderlecht man crashed an excellent downward headed to the keeper’s right, however, Al-Sheed got across well to parry the ball away to prevent the Ireland manager from securing his first international victory. 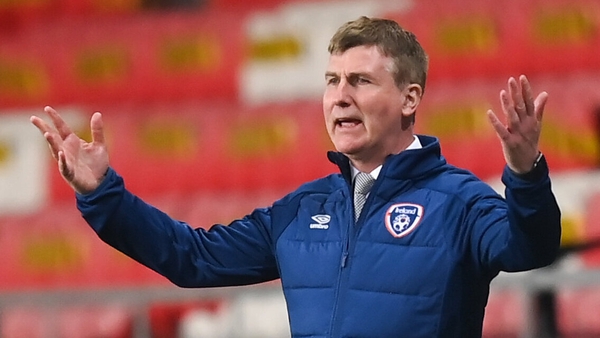 Critics 'coming out of the woodwork' says defiant Kenny