Liam Brady praised Republic of Ireland's style of play in the 3-2 defeat to Serbia but felt Stephen Kenny's team selection was an issue in Belgrade.

The Boys in Green opened up the 2022 FIFA World Cup qualifying campaign with a loss to the Serbians, who are second seeds in the group.

Alan Browne scored Ireland's first goal in seven matches but Serbia battled back through Dusan Vlahovic's equaliser before Fulham striker Aleksander Mitrovic chipped goalkeeper Mark Travers who was off his line before adding a header.

With injuries an issue, manager Stephen Kenny named a team which included a host of inexperience including Bournemouth goalkeeper Travers.

Speaking to RTÉ's Morning Ireland, Brady did not agree with all of the personnel choices made.

"It wasn't bad," he said on the general performance. "For the style of play and composure on the ball, trying to play out from the back, I would be very pleased with that and he gets the thumbs up for that.

"Team selection, I'd be a little bit critical. I think inexperience let us down badly - one with the goalkeeper. I think he had a bit of a bad game.

"Although Stephen Kenny didn't have a great deal to select from but I'm just wondering whether (Gavin) Bazunu would have been the better choice. Young Travers looked nervous right from the start. (Dusan) Tadic nearly beat him at a corner kick when he was in a bad position.

"And I think the leaving of (Shane) Duffy out of the team had a big bearing on the result. (Ciaran) Clark got done twice on headers. I don't think Duffy would have lost those and we didn't have any threat at corner kicks.

"We had six corner kicks and no Duffy in the team. So on the style of play yes, on the team selection I'd be a little bit critical."

Brady added that whether it was Bazunu or Travers in goal, it would have been a "gamble" given their youth and inexperience but felt the former Shamrock Rovers goalkeeper had more games under his belt of late.

"Young Bazunu is playing a lot of games for Rochdale. Travers is hardly playing. But I don't see them in training and things like that. I don't know their characters - I know Gavin Bazunu a little bit. He seems to have a very strong character. It's certainly something (Kenny) is going to look at," he said.

"And I think Clark let us down on a couple of occasions that cost us dear. But they're a good side Serbia. Tadic was outstanding. Vlahovic playing for Fiorentina in Serie A was very, very good and Mitrovic came on, although he's having a bit of a nightmare for Fulham this year, he scored two very good goals."

On the midfield, he added that he didn't think Jayson Molumby "performed at all" and "would have preferred" Robbie Brady in his place, describing it as "another selection our manager got wrong".

"I didn't see him, apart from making some fouls. I didn't see him. I thought (Josh) Cullen played well. He held his position well, he used the ball well and Browne certainly started the game very well. He's a bright player and it was a welcome sight to see him getting on the end of (Callum) Robinson's cross."

Touching on the youth coming through for Ireland, Brady said that they cannot be compared to past generations like Robbie Keane, Richard Dunne and Damien Duff.

"These are lads who I don't believe will be playing at the top level of football," he said.

"We need to be realistic and (Kenny) has had a very hard time of it and I appreciate that and it's been very difficult for him. But let's hope we have a good World Cup campaign and really give that second spot a real good go, then we'll be the judge of Stephen Kenny at the end of that." 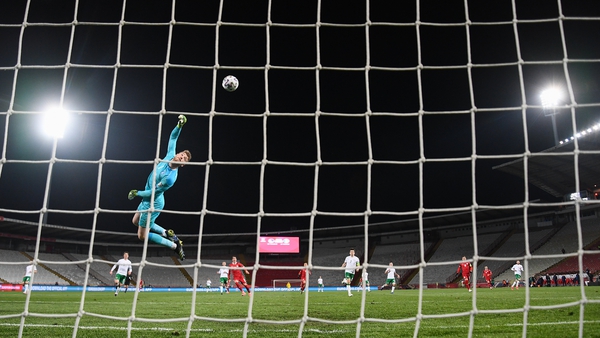