Jose Mourinho has challenged his Tottenham team to show him the qualities that have been missing in the last two matches when they head to Aston Villa.

Spurs' season has unravelled in the last seven days as a north London derby defeat to Arsenal, which significantly hurt their top-four chances in the Premier League, was followed by a humiliating Europa League exit at the hands of Dinamo Zagreb.

Mourinho questioned his side’s attitude after both defeats and wants to see the "basics of any job" as they look for a response against Villa.

Asked what he was looking for from his team against Villa, he said: "That’s the same question as after the game against Arsenal and I didn’t see it against Zagreb, what I wanted to see.

"So it’s hard to say because I was expecting a completely different attitude and we didn’t get that (at Zagreb).

"Obviously, what do I want against Aston Villa? I want all the ingredients that I told to some of the previous questions.

"They are what I consider the basics of an honest professional. It doesn’t matter about the area. At the moment we’re speaking about football but we could be speaking about any other area in society.

"The basics of any job is honesty, the commitment, the desire, the respect for the people who require you to do a good work. That’s what I expect to have every day, every match." 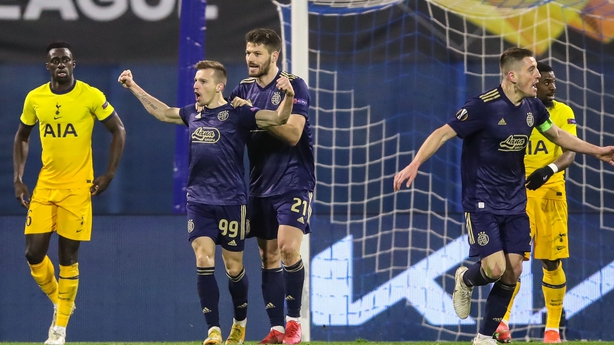 Spurs' demise against the Croatian side (above), whose manager was sent to prison for fraud on Monday, was partly due to the absence of Pierre-Emile Hojbjerg, who provides leadership in the middle of the park.

They were missing that in the Croatian capital, but Mourinho does not feel comfortable addressing that issue with the media.

"To speak about leaders on the pitch is something that makes me a little bit uncomfortable," he added.

"It’s something that belongs to us, to the dressing room, to the life of us as a working group. Of course from the outside you can have your perspective, you can analyse it and probably with your experience and knowledge you can draw some conclusions but I’m not going in that direction.

"The reason why we lost the game in Zagreb was because for 100 minutes or so, one team put absolutely everything on that pitch and another team only felt the pride and let’s say a motivation to fight when the result was already 3-0.

"Yes, in these 10 minutes we could and should, we had the chances to go through. But they beat us on heart and another thing that I refuse to say in front of the cameras.

"But when you lose on that, as a professional you have to feel very, very hurt and this is the way I feel. I’m not just sad, and I’m happy to be a guy with lots of experience and emotional control because I can control what I feel in this moment, at least in front of the cameras."