Tottenham manager Jose Mourinho accused his players of lacking professionalism as they crashed out of the Europa League with a 3-0 defeat to Dinamo Zagreb.

Spurs had one foot in the quarter-finals after last week's 2-0 first-leg win, but they crumbled in Croatia and succumbed to Mislav Orsic's sensational hat-trick, going out 3-2 on aggregate after extra time.

Even at half-time of the second leg it seemed unthinkable that Spurs would not progress, but Orsic struck twice in the second half to level the scores up and then won it in the additional period.

What made it even more unbelievable is that Dinamo's manager Zoran Mamic was sentenced to four and a half years in prison on Monday and was forced to resign.

Mourinho's side could not take advantage of the disruption in the Zagreb camp though and he was left concerned by their attitude for a second successive game, having also questioned their desire in Sunday's north London derby defeat to Arsenal.

"To be a professional you must have attitude every day and in every minute of every game."

"My position as a head coach is the position that stops me, or at least makes me uncomfortable to come in front of the cameras and go deep in analysis. I hope you can understand that.

"I believe all of us have to be humble enough to accept any criticism that you can make of our work. It is not for me to go on that.

"They played with a lot of desire that I can call it also professionalism, because for me professionalism starts exactly in the attitude. To be a professional you must have attitude every day and in every minute of every game.

"Then more talent, less talent makes a difference between players but what is never negotiable is attitude and they beat us on attitude." 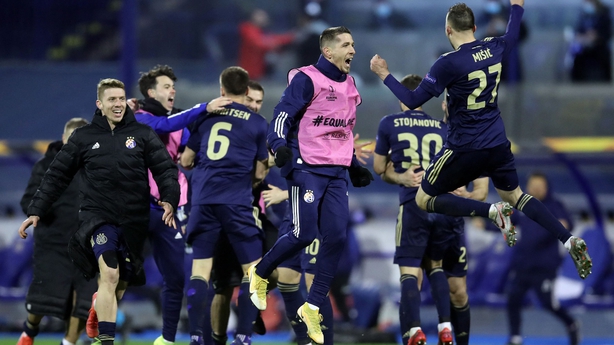 Going out means that any hopes of silverware this season now rest with a Carabao Cup final against Manchester City next month.

But even winning that might not prove sufficient as their European exit closes one avenue into next season's Champions League and their Premier League form is unlikely to present another as they remain off the pace in the top-four race.

Mourinho added on BT Sport: "To say I am sad is not enough. What I feel goes much further than sadness.

"I just left the Dinamo dressing room where I went to praise their guys and feel sorry that one team that is not my team won the game based on attitude and compromised so I feel more than sad. That's it.

"Football is not just about players who think they have more talent than others. I believe the players only realised the game was in risk when they scored the second and it went to extra time.

"If I forget the last 10 minutes of extra time where we did something to get a different result and go through, in the 90 minutes and in the first half of extra time was one team that decided to leave everything on the pitch, they left everything there, sweat, energy, blood.

"At the end of the game even left tears of happiness. And I have to praise them.

"My team, I repeat, my team, I am there, that didn't look like they were playing an important match.

"We have a lack of basics, fundamentals, our performances are just in relation of that. Mentally we should be stronger, more competitive."

Tottenham goalkeeper Hugo Lloris said their shock exit was a "disgrace" and reflected deeper issues at the club.

"I think we are more than disappointed, it is a disgrace," Lloris said. "I hope everyone in the changing room feels responsible.

"The taste of defeat is more than painful. We are a club full of ambition, I just think at the moment it is a reflection of what is going on in the club.

"We have a lack of basics, fundamentals, our performances are just in relation of that. Mentally we should be stronger, more competitive."

The France goalkeeper said Tottenham, who were also heavily criticised for a poor performance in Sunday's north London derby loss at Arsenal, had underestimated the Croatian champions.

"When you are not ready at this level, you pay," he added. "There is quality everywhere and if you don't respect the opponent they can punish you, that's what happened."

Tottenham, who are eighth in the Premier League, visit Aston Villa on Sunday.