Republic of Ireland midfielder Jason Knight scored the winner as Wayne Rooney claimed his first win as Derby interim boss, with County winning 1-0 at Millwall to move off the bottom of the Championship.

Knight struck the winner in the 69th minute to end the Rams' 11-match winless streak and take them to within two points of safety.

Millwall fans returned to The Den for the first time since 29 February and appeared to boo as the players took a knee in support of the Black Lives Matter movement.

Troy Parrott came on as a substitute for Millwall.

Ireland under-21 defender Nathan Collins also got on the scoresheet as Stoke City climbed up to fifth.

Collins' 19th-minute header helped the Potters beat Middlesbrough 1-0 as they made progress up the table.

In front of fans for the first time at their new stadium, the Bees went behind following a wonderful opening goal from Joe Rothwell in the 19th minute.

Ivan Toney struck his 14th goal of the season from the penalty spot nine minutes before half-time, with Lenihan sent off for his foul on the striker, before Sergi Canos made it 2-1 to Brentford on the hour.

But Rovers snatched a point three minutes from time through Jacob Davenport's strike.

Elsewhere, Norwich struck twice in the final nine minutes to beat bottom-placed Sheffield Wednesday 2-1 and move one point clear at the top of the table.

Josh Windass headed the Owls in front on the hour mark, but Josh Martin equalised with his first senior goal before Max Aarons netted the winner shortly after.

Reading moved into third with a 2-0 victory over 10-man Nottingham Forest in the early kick-off.

After Ryan Yates was sent off for handball on the goal line in the 14th minute, Lucas Joao converted his 14th goal of the season from the resulting penalty.

Michael Morrison headed in a second eight minutes after the interval to leave struggling Forest languishing just above the relegation zone.

Swansea rose to fourth after goals from Connor Roberts and Andre Ayew saw off Luton, who had Matty Pearson sent off, 2-0.

Watford slipped to seventh following a 1-0 defeat at home to Cardiff, whose third consecutive victory was secured by Kieffer Moore.

Having gone behind to Tom Barkhuizen's header, the Chairboys responded through goals from Garath McCleary and Scott Kashket.

But McCarthy's intervention helped North End salvage a 2-2 draw and leave Wycombe in the bottom three.

Coventry extended their unbeaten run to five matches with a 3-1 triumph over Rotherham.

Maxime Biamou and Tyler Walker struck inside 12 minutes before Leo Ostigard added a third in the second half, with Daniel Barlaser netting a late penalty for the fifth-bottom Millers. 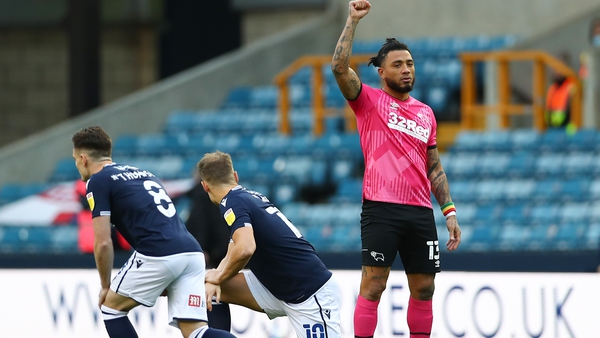