Kick It Out chair Sanjay Bhandari has applauded the players of Millwall and Derby for "defying the hate shown by some fans" at The Den on Saturday.

Some Millwall supporters booed when players from both sides took a knee before the Sky Bet Championship match, which Derby won 1-0.

The Den was able to host 2,000 fans with London placed in tier two of the current system of coronavirus restrictions, but the return of spectators was overshadowed by the pre-match incident.

Bhandari said in a statement to the PA news agency: "We are saddened by the behaviour of fans booing the players taking the knee today at Millwall.

"What this demonstrates is that players are right to continue standing up to discrimination, whether that is through taking the knee or speaking out.

"The fight for racial equality continues and we will continue to work closely with clubs across the country to tackle discrimination in all its forms.

"We urge the players to continue using their platforms and their voices to support this fight.

"We applaud the players of Millwall and Derby for taking a stand and defying the hate shown by some fans today." 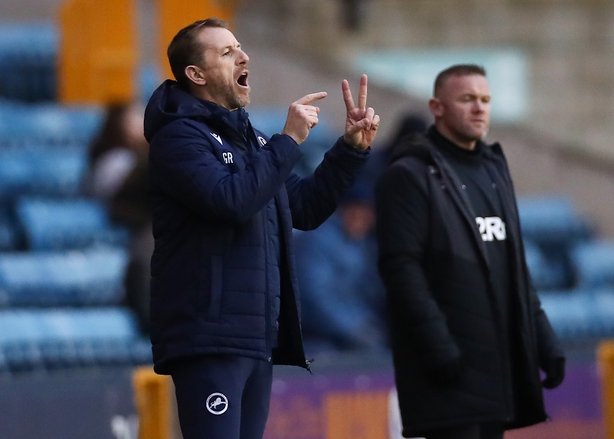 Fans were back at The Den for the first time since 29 February, but their long-awaited return was quickly mired in controversy.

In footage seen on social media, booing from the stands is clearly heard after referee Darren England blows his whistle for the players to take a knee, a gesture used to show support for the fight against discrimination following the unlawful killing of George Floyd in America earlier this year.

The Football Association condemned the behaviour of the Millwall fans. A spokesperson said: "The FA supports all players and staff that wish to take a stand against discrimination in a respectful manner, which includes taking of the knee, and strongly condemns the behaviours of any spectators that actively voice their opposition to such activities."

Derby forward Colin Kazim-Richards made his feelings about the booing clear after the match.

He tweeted: "Having to say this is a pain but I'll say it every single damn time this is why I STAND and STAND PROUD and I have to say every single person involved with @dcfcofficial did too made me proud to wear this shirt with the boys today!!! Absolute disgrace.."

Millwall manager Gary Rowett, who saw Jason Knight grab Derby's matchwinner, told Sky Sports:  "I'm disappointed that we are talking about that when we should be talking about the fact we are all back and we want to enjoy the football match again.

"The club does an enormous amount of work on anti-racism and the club do a lot of work in the community and there is some really positive stuff, so of course I am disappointed.

Ahead of the Sky Bet Championship match, the topic of players taking a knee was discussed on Millwall's fans' forum and a statement from the first-team squad was published on the official club website on Friday.

It read: "As a squad we are fully supportive of the entire football family's efforts in ridding the sport, and society generally, of all forms of discrimination.

"It is our duty as players to reinforce the positive messaging and action of clubs, community trusts, charities and governing bodies, and we do so with great pride and knowledge that so much good work is being done up and down the country.

"The gesture of 'taking the knee' before matches provides an opportunity for us to do exactly that and continues to allow all those playing to publicly showcase their support - on behalf of the whole squad - for the fight against discrimination.

"We wish to make clear that taking the knee, for us, is in no way representative of any agreement with political messaging or ideology. It is purely about tackling discrimination, as has been the case throughout.

"We will continue to do this until the start of the New Year when a new and comprehensive anti-discrimination strategy will be announced by the club."

The PA news agency has approached Millwall for a comment.