Ian Baraclough insisted Northern Ireland's young players could take plenty of positives from their Nations League campaign even as it ended in relegation.

Northern Ireland’s drop into League C was confirmed even before they kicked off against Romania on Wednesday night as UEFA awarded their opponents three points from Sunday’s cancelled match against Norway, leaving Baraclough’s men six points adrift at the foot of Group B1.

But they still put in a positive performance, taking the lead through Liam Boyce in the 56th minute only for Eric Bicfalvi to level nine minutes from time.

Baraclough restored the likes of Jonny Evans and Craig Cathcart to his side after Sunday’s defeat in Austria, but still fielded a youthful side in the absence of Steven Davis and others.

Matty Kennedy made his debut, Ali McCann lined up for his second appearance and Dan Ballard was included in a back three, while Manchester United’s Ethan Galbraith came off the bench to make his debut.

Two years after Michael O’Neill used the Nations League to establish the likes of Jamal Lewis and Bailey Peacock-Farrell in his first-choice 11, Baraclough has also been looking to the future.

"We knew we had to do it," Baraclough said. "We can’t just keep rolling out the same team. Especially with these triple-headers, we’re stretched as a pool of players so we knew we had to find players who could come in and enhance the squad.

"I think we’ve done that and there are still one or two who can come in and do more. Now they’ve got to go back to their clubs and be getting games regularly to give me a headache as to who to pick next time around.

"Yes, when the Nations League rolls around again we’ll be in League C but we’ve got to try to make sure we get into League B again as soon as possible." 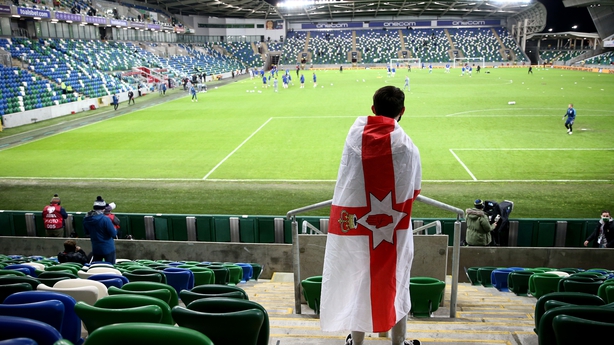 Relegation will have an impact in qualification campaigns as Northern Ireland's seeding takes a hit, along with the Republic's, but Baraclough will hope his side can follow the path which has seen Scotland go from League C two years ago to reaching Euro 2020 and narrowly missing out on reaching League A this time around.

It has been a tough introduction for the man who replaced O’Neill in June and he remains without a win inside 90 minutes – his only victory to date the penalty shoot-out in the Euro 2020 qualifying play-off semi-final against Bosnia and Herzegovina.

However, he said he believes there was plenty for fans to be positive about.

"It was never going to be easy to come in and hit the ground running," he said. "We’ve been punching above our weight for a little while and we have to do that to stay at this level.

"We have to find a way to win games, to get into winning positions. I’m pleased we took the lead in the last two games. We couldn’t hold on to it but we’re finding ways to do that.

"I’ll take it on the chin that we haven’t won a game in the Nations League. That’s not a problem. We’re trying to find solutions, trying different ways to bring young players on.

"Having come through this Nations League, albeit with relegation, I think we’re in a much better place."