James Collins rued the Republic of Ireland's wastefulness in front of goal as they were held to a 0-0 draw by Bulgaria.

Collins had the best chance of the first half, heading over from close range after great play by Daryl Horgan, and the Luton striker hit the side netting with a volley shortly after the restart.

Ronan Curtis also should have done better when played in on goal by Jason Knight as Ireland's winless run under manager Stephen Kenny extended to eight games.

The draw was enough for Ireland to avoid relegation from Nations League B but their failure to win means they will drop into the pot of third seeds for next month’s 2022 World Cup qualifying draw.

Collins said: "We came into the game tonight wanting to win, definitely not lose the game.

"We wanted to win the game and we had the better chances to do that, but we just couldn't break them down.

"And it's down to me too, I should have had a couple tonight, so I hold my hands up, but it just wasn’t to be.

"But I suppose on a positive note, we haven't been relegated, so that's a bit of good news.

"So we’ll go away now, come back in March and start fresh."

"We understand that scoring goals at the minute is important, everyone realises that," he said.

"But I thought there were some positive signs tonight in that we created chances in the second-half especially. I thought we were excellent.

"I's just finding that little bit of luck to get it in the back of the net. I think once it does go in, however that may be, that will start the goals flying in.

"Robbie's (Brady) shot against the crossbar, my chances, it just needed one to go in. The players in this squad won't shy away from it. 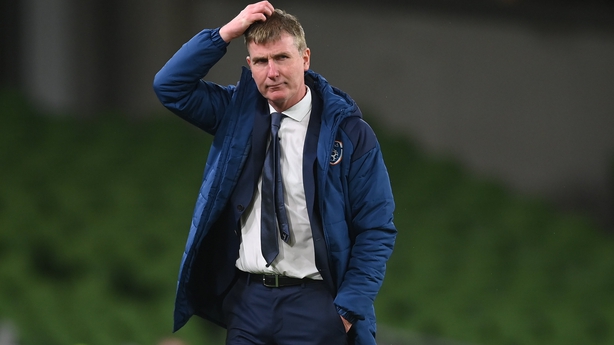 Collins was recalled by manager Stephen Kenny for the games against England, Wales and Bulgaria, having been absent since making his debut last year, and said that while the new manager had been unlucky with Covid-19 withdrawals the players were committed to succeeding for him.

"Of course it's been a difficult campaign with the injuries and the Covid situation, but we can't use that as an excuse, it’s happened, it’s a part of life at the minute and we have to try and deal with it.

"The lads who have come in have been excellent. Maybe now we go back to our clubs for a few months and we get everyone fit and hopefully the Covid situation will have died down by March and we’ll have a full squad to pick from and go again."

"I’ve only met Stephen for the first time in this camp and he’s been excellent for me. I feel really sorry for him because it feels like it’s just one thing after another.

"The lads are all fighting hard for him and his staff, the staff are excellent as well, and we want to win football games."