Stephen Kenny watched his side lose for the fifth time in seven games, as Ireland were beaten in Cardiff, however, the Ireland manager was adamant that he would prove a success in the job as national team boss.

Ireland have now failed to win any of Kenny's seven matches in charge since that opening game in Sofia against Bulgaria in September.

The 1-0 defeat to Wales was the fifth of Kenny's tenure, including the penalty shoot-out loss in Slovakia, and the team have remarkably failed to score in any of the last six games.

Shane Duffy’s headed effort in the opening 1-1 draw with Bulgaria was the last goal that Ireland scored, and the goal drought has now handed the manager the unwanted record of the longest time that the national side have gone without scoring.

Ireland set out with attacking intentions for the game in Cardiff with the manager adding Robbie Brady to the midfield unit to complement the attacking trio.

But despite having the better of the first half, Wales’ formation change in the second half resulted in a 67th-minute David Brooks goal, which proved the difference between the two sides.

Speaking after the game, Kenny said that he was disappointed with the defeat, but appeared encouraged by many aspects of the performance in what he described as "unprecedented circumstances", and was happy to see the progress of emerging players who he admitted were not the finished article.

Kenny is building a side to compete in next year’s World Cup qualifiers and is trying to paint the bigger picture and is confident that the work being done now will pay off in the future.

"I have no doubts I will be a success. Absolutely no doubts," said Kenny, speaking at the post-match press conference.

"We have a clear vision of what we want. Between this camp and the previous camp, we have been in quite unprecedented circumstances, in modern times anyway.

"Certainly, it’s quite unprecedented. Nevertheless, the players have come out against a good Wales team today and put in a good performance overall.

"We didn’t create a load of chances, but you’re not going to against a good Wales team. We probably had the better chances up to the last five minutes, when they had two on the break." 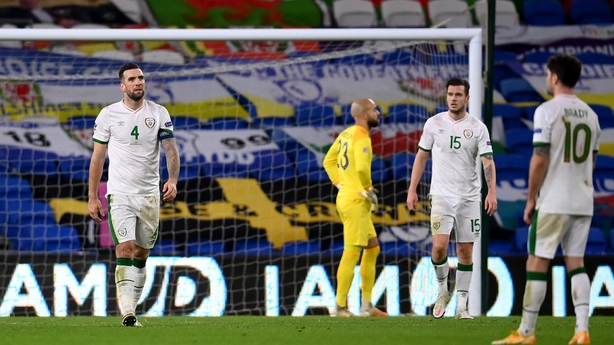 Despite creating several opportunities throughout the 90 minutes at the Cardiff City Stadium, Ireland were unable to hit the back of the net, and when asked how he would address that situation ahead of Wednesday’s game at home to Bulgaria, the manager again just pointed to the fact that opportunities were presenting themselves.

"At the end of the day, we haven't won and I know that, I realise that. You asked the question about scoring goals – we had quite a few chances, but Wales are quite a strong team, you're not going to come over and create loads of chances against them away from home.

"One of the things that we have done is given players an opportunity with the World Cup qualifiers in mind, and I think Adam Idah, although he's not scoring, he's shown that he's a different type of striker than what we have had in recent history.

"He's not the finished article, nor would he claim he is, but he is someone with real potential."

"It was just a very, very tight game"

The mentality of the players was questioned ahead of the game and by the manager's own admission, aspects of his side’s play in the defeat to England were just not good enough, but overall, he appeared happy with the levels that the team reached against Wales.

"You can't afford to feel sorry for yourselves," said Kenny. "It's not going to do anyone any good. I'm not really one for focusing on the positives, but with all that we've had to contend with over the last week, I thought the mentality of the players was brilliant.

"They actually gave everything of themselves and it was just a very, very tight game, like the goal we conceded, just a deflection off Shane Duffy's head, it came up in the air over Matt and just a header back across the goal, so it was a difficult one to take.

"I felt the players showed a level of intensity and a real high work-ethic and a sense of team, good teamwork, but unfortunately we've lost the game, come out the wrong side of a narrow defeat." 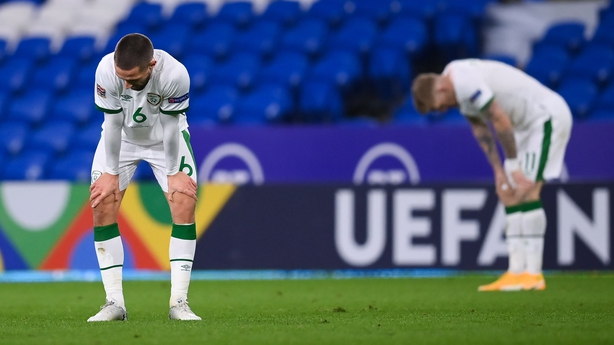 Next up for Ireland is their final game of the calendar year as Bulgaria come to the Aviva on Wednesday night for a Nations League fixture which will decide who finishes last in the group and face relegation to League C.

"We have to dust ourselves down and get ready for Bulgaria," said Kenny who will have more selection issues with Jayson Molumby and Jeff Hendrick both ruled out due to suspension.

"It’s hard to believe really, both players are suspended now. Jeff is doing really well at the moment. He has shown a better range of passing, a more ambitious range of passing, has shown an ability to drive forward with the ball in space, and he is putting in an unbelievable shift in terms of kilometres clocked up.

"That central midfield role probably suits him better than playing higher up the park. He will be a loss.

"Jayson is still finding his way, he is in the infancy of his international career. He has a lot of really good attributes. He is quick around the park, a good range of passing and quite aggressive. But he is out so we will have to adapt."

And while the manager is focused on the game, he also has one eye on the World Cup qualifiers, which will begin in March and be played out throughout 2021 as the team look to qualify for the Qatar tournament in 2022.

Kenny also emphasised the fact that his selection options will be much improved by the time those World Cup games come around.

"For the World Cup campaign we will have Seamus Coleman, Enda Stevens, John Egan, and attacking options like Aaron Connolly, Alan Browne, an emerging Troy Parrott coming into what we have. James McCarthy as well.

"That will give us a lot of encouragement."