Ireland's poor run of form continued at the Cardiff City Stadium as Stephen Kenny's side were beaten 1-0 in their UEFA Nations League clash with Wales.

David Brooks headed home the only goal of the game from close range in the 67th minute as the home side remained top of their group, while Ireland have now failed to score in six successive games.

Ireland had their chances throughout but were unable to convert and ended the game with ten men as Jeff Hendrick saw red for a late challenge on Welsh substitute Tyler Roberts.

Looking to bounce back from a 3-0 drubbing at Wembley on Thursday night, Stephen Kenny maintained his attacking intentions, bringing Robbie Brady into the midfield unit, with James McClean named to start on the left flank.

No goals in five games, Ireland had a great chance to take the lead with less than two minutes on the clock as Robbie Brady lifted a fine free-kick towards the back post. Shane Duffy watched the ball onto his head as he arrived late, but his diving effort was mistimed and failed to test Danny Ward in the Wales goal.

In truth, both sides cancelled each other out in the opening exchanges as their attempts to knock the ball around invariably ended up in Cardiff cul de sacs. Wales' only effort on goal came after 13 minutes as Joe Rodon connected with a corner but the ball flew over.

Ireland missed a great chance to open the scoring in the 18th minute following good link-up between Daryl Horgan and Matt Doherty before the former whipped a great ball in on goal with James McClean arriving at the back post.

Neco Willams made a decisive clearance, however, the ball dropped to Brady on the edge of the box. Time to pick his spot, perhaps, the Burnley man snatched at it a bit and slammed the ball over the bar.

Wales hit back a minute later as a snap-shot from David Brooks, following a mix-up between Jayson Molumby and Kevin Long, led to a good save from Darren Randolph down to his left. 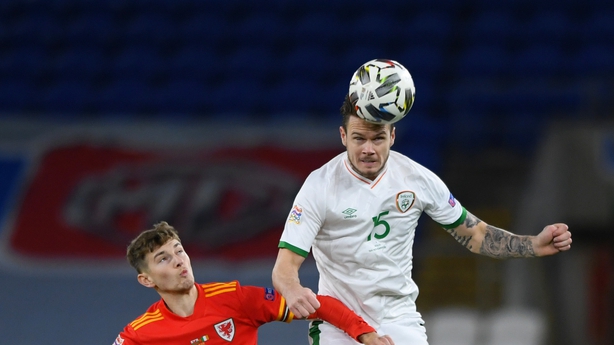 In the 24th minute, Gareth Bale tried his luck from distance with a well-struck free-kick, which dipped late and almost snuck under the crossbar, although, Randolph appeared to have it covered.

Another chance for Ireland to open the scoring arriving on the half-hour mark as Brady, thriving in the number 10 role, lifted a clever ball over the top as McClean cut across from the left to set up a snap-shot with his right foot from a tight angle.

The Derry native was probably more intent on working the ball across the goal but a strong right foot save from the keeper cleared the danger.

Brady again was in the thick of it as he intercepted the ball during a Wales attack before setting Idah off on a run between two Welsh defenders.

Idah did well to cut back inside the retreating Roden, however, the new £11million Spurs signing showed his class to get back around to make a crunching tackle to take ball and then man as the Norwich striker needed attention.

Joe Morrell picked up a yellow for a petulant kick-out at Molumby who aggravated after the whistle. The referee was right there but opted for a caution as opposed to a straight red. Molumby was also booked, which rules him out of Wednesday's game against Bulgaria.

Wales looked lively running at the Irish defence, however, their decision-making was off in the final third with Daniel James coming closest to troubling the Irish goal, however, his shot was blocked after a clever cut inside.

Another chance arrived thanks to Ireland’s high press as McClean won the ball with a trademark crunching tackle on Bale to set Brady off en route to goal.

But this time Brady shot too soon and it never threatened as he attempted to pop one towards the far top corner from 25 yards out.

The manager said that Ireland were marginally better in the first game between the two sides in October, which ended all-square, and the first half in Cardiff was a continuation of the same as it remained scoreless at the break.

An early chance for Wales three minutes after the re-start as Brady gave the ball away before the home side worked it to Bale, however, his shot turned tame and Randolph was alert to the danger.

Kenny made his first change in the 59th minute with the introduction of Jason Knight, replacing Daryl Horgan.

And the Derby County youngster was immediately involved as a good team move eventually allowed McClean to cross. Chris Mepham took a touch, which allowed Idah to get across the defender before a quick swivel shot, but the defender made amends to block the shot.

Wales also made a change to personnel and formation as target man Kieffer Moore was sent on to disrupt the Irish defence.

Five minutes later, the home side were ahead.

A neat move down the right led to James delivering a tempting ball right on top of the six-yard box with Moore competing with Duffy, who helped his header on towards the back post.

Bale arrived to beat Doherty in the air, helping the ball back across the goal and with Randolph out of position, Brooks flew in to head into the empty net from just a yard from goal.

Ireland responded with a double substitution when those on the pitch failed to react adequately to the goal as James Collins and Conor Hourihane were sent on for the final 15. 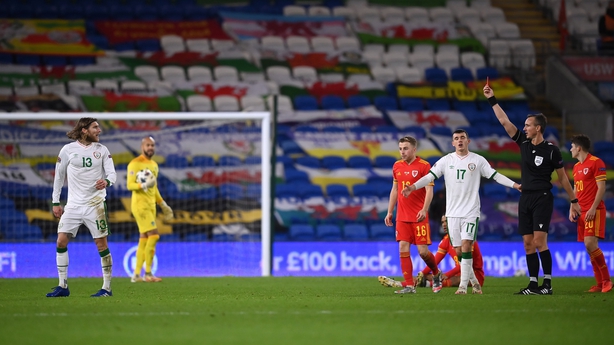 And Collins made an immediate impact as he battled just outside the box to set up a shot from 18 yards, which tested the keeper but Ward was up to the task.

Two minutes later, Randolph made a world-class save to keep Ireland in the game.

Collins had again done well at the other end to win a free in a good position, however, Wales broke at pace as a follow-up effort from Hendrick was blocked, which allowed Brooks to race clear with just the keeper to beat.

The Bournemouth forward appeared to do everything right as he clipped the ball to the advancing keeper's left, however, somehow Randolph got a strong arm on the ball and helped it past the post.

More changes for Ireland as Jack Byrne and Callum O’Dowda came on for the final ten minutes and the Shamrock Rovers man was involved in a good move with Knight in the middle of the park before setting Collins through on the edge of the box.

Another shot on target but again it lacked venom and proved straightforward for the keeper who had rarely been properly tested all evening.

Collins had another chance in the 89th minute as he raced onto a tempting Byrne ball into the box and judging by his reaction, the Luton Town striker believed that he should have done better with his header from eight yards out.

Wales' best form of defence was attack as they looked to keep Ireland on the back foot for the final exchanges and again Randolph had to be alert as he made a reflex save from Moore from close range with the game already in the first minute of the added five.

A penalty appeal was waved away in the 93rd minute as Neco Williams handled the ball at the near post from a corner kick and worse was to come for Ireland as a quick counter sent Roberts clear, which led to the

Hendrick red as his attempted challenged took man rather than ball, with no covering player.

And that was the last real action of the game as Ireland head home to Dublin to face Bulgaria for a vital group game on Wednesday after another encouraging performance but ultimately, a losing one.