Frank De Boer is still waiting for his first win in charge of Holland after his side were forced to come from behind to claim a 1-1 draw against Italy in Nations League Group A1.

In the same group, Robert Lewandowski struck either side of half-time as Poland stormed to a 3-0 win over 10-man Bosnia and Herzegovina.

The striker already had five goals to his name this season, which kicked off on 18 September, and carried his form onto the international stage, with Karol Linetty scoring in between the Bayern Munich player's double.

In a repeat of the 2018 World Cup final, France ran out 2-1 winners against Croatia in Group A3. 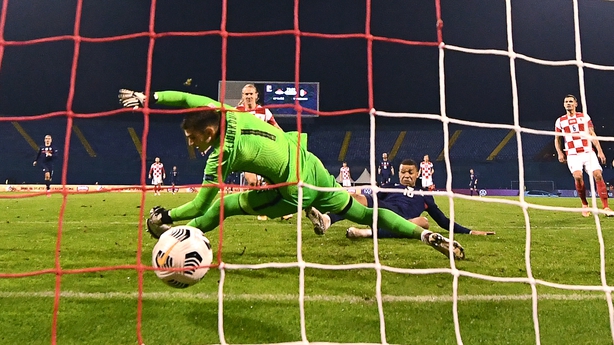 Antoine Griezmann gave France an early eighth-minute lead, which was cancelled out by Nikola Vlasic, before Kylian Mbappe's winner with just over 10 minutes left.

Liverpool forward Diogo Jota scored twice after Bernardo Silva opened the scoring as Portugal beat Sweden 3-0 to go level with France at the top of the group.

Belgium moved to the top of Group A2 with a 2-1 win in Iceland.

Romelu Lukaku netted twice in the first half, including a penalty to restore the lead after Birkir Mar Saervarsson's leveller.

England fell to a first home defeat in two years as Harry Maguire's sending off was compounded by Denmark's Christian Eriksen scoring a controversially-awarded penalty on his 100th cap. 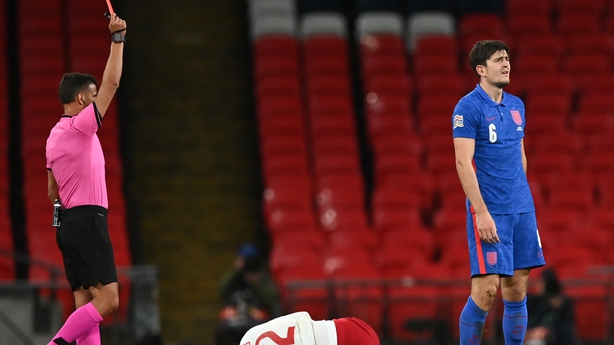 Three days on from a hard-fought comeback to beat Belgium to briefly move top of their group, Gareth Southgate's side stumbled to a first defeat on home soil since September 2018.

Scotland fought and scraped their way to an eighth game unbeaten with a 1-0 win over the Czech Republic at Hampden Park following Ryan Fraser's goal, while also in Group B2, Israel claimed all three points in a 3-2 win in Slovakia.

Wales went back to the top of Group B4 with 10 points from four games, with Stephen Kenny's Ireland still looking for their first win after suffering a 1-0 defeat in Helsinki.

Northern Ireland's frustrations continued as a Stuart Dallas own goal condemned them to a 1-0 defeat to Norway in Oslo. 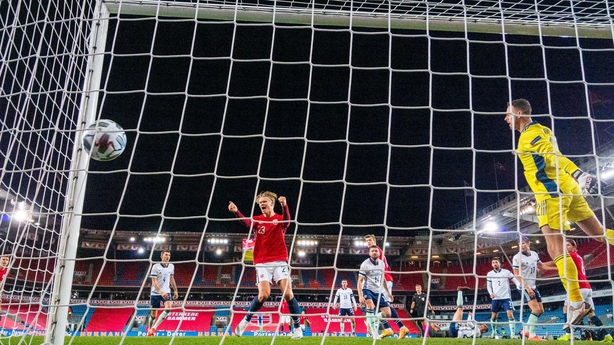 It was a seventh defeat in eight for Northern Ireland in this competition, keeping them bottom of Group B1.

In Group B3, Russia and Hungary played out a goalless draw while Turkey drew 2-2 with Serbia.

Kosovo drew 0-0 in Greece in Group C3, while Slovenia stormed to a 4-0 victory in Moldova.

In C4, Belarus beat Kazakhstan 2-0 while Lithuania drew 0-0 with Albania. 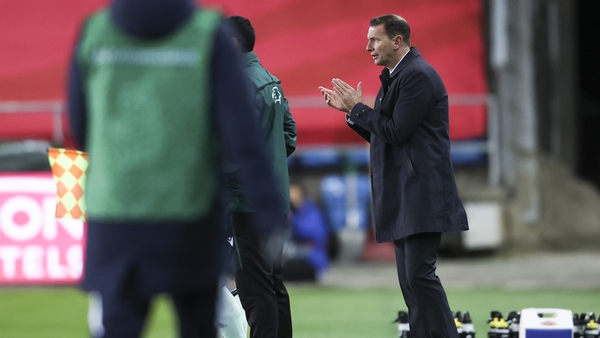