The Republic of Ireland ended a dramatic week of international football with a UEFA Nations League defeat in Helsinki as they were beaten 1-0 by Finland.

Three games inside seven days began for Stephen Kenny's side with a Euro 2020 exit last Thursday in Slovakia, and ended in defeat in the Finnish capital thanks to Fredrik Jensen’s 66th-minute winner.

That’s four games in a row for Ireland without scoring, and the nearest Kenny’s side came to breaking the deadlock was a stoppage-time header from substitute Ronan Curtis, whose close-range effort was brilliantly clawed away by the home stopper.

There was a sluggish start from both sides in the Olympic stadium to end this international window, but Ireland eventually started to show their intentions as they began to exert some pressure, pressing high up the pitch.

It took 13 minutes of play before either side got a look at goal and it came from a clever quick free-kick from Conor Hourihane to roll Sean Maguire down the left flank.

The Preston striker ran at the defence before squaring to Daryl Horgan, who had raced into the box from the right, before playing a perfectly weighted cushion pass into the path of the arriving Jeff Hendrick on the edge of the box.

Hendrick hit it first time but opted to side-foot for accuracy, rather than smash it goalwards, and it was blocked before threatening the goal.

Finland's first chance came from an optimistic effort from Glen Kamara from outside the box in the 16th minute, and while it was well hit and on target, Darren Randolph was behind it all the way.

The tempo failed to really get going, however, in that first 25 minutes, but Aaron Connolly started to get some joy cutting in from the right and running at defenders.

A curling effort in the 29th minute was well read by the keeper before Connolly had another look at goal a minute later, but this time he sliced it high and wide. Matt Doherty was working well down the right flank with the lively Horgan and while some good passages brought the play into the final third, Ireland were unable to create.

Finland had a great chance to open the scoring in the 37th minute, following a neat passage of play between Robert Taylor and Pyry Soiri, with the latter slipping a delightful ball behind the Ireland line for Teemu Pukki to run on to.

Pukki smashed his shot across the face of the goal, but it slipped past the far post and wide.

Ireland created their own chance in the 39th minute after a clever switch of play that fed Connolly arriving into space just outside the box.

The Brighton striker shaped to hit the ball, but instead rolled the ball right into the path of the arriving Sean Maguire. However, the striker may not have been expecting the pass and his touch let him down.

But then the home side had another great look at goal as Ireland lost possession in midfield, allowing Pukki to pick the ball up and run at the Ireland goal.

The striker took it to the edge of the box and while it looked like he was set to curl it to the far corner, he opted to shoot for the near post, trying to deceive the keeper, but his effort rolled just the wrong side of the post.

Another goalless half for Ireland who were now midway through their fourth straight game without scoring, and to be honest, they were struggling in the creative department, with Hendrick not proving too effective in the number 10 role. 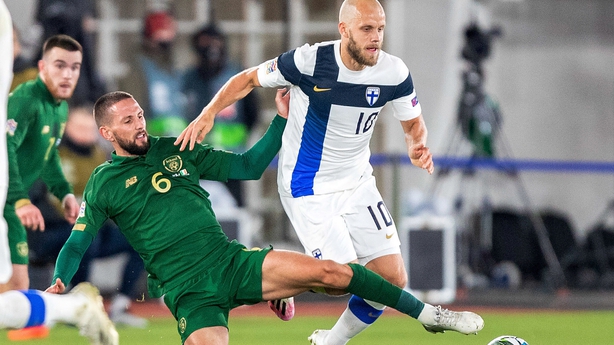 An eventless opening 10 of the second half with both sides made a change, before Jayson Molumby opened his legs and raced clear down the right flank after good work from Shane Duffy.

The midfielder got down to the byline and lifted it to the near post, but the keeper came and claimed it just before Horgan arrived in off the left.

The game really opened up with half an hour remaining and there were chances at both ends inside a minute as Finland almost worked a chance inside the box following a careless Horgan pass, before Connolly raced in on goal at the far end, but his low shot was easily saved – there were options inside but he chose to go it alone.

Doherty and new man Robbie Brady were starting to link well up the right, while Finland were also maintaining their push at goal, with Pukki setting up replacement Ilmari Niskanen, but the run was matched and the shot blocked.

Then in the 63rd minute, Ireland hit the crossbar.

Numbers forward, Hendrick drove into the box and a sliced clearance saw the ball bounce up for Enda Stevens. The former Shamrock Rovers man instinctively hooked it goalwards but looked on in agony as the ball dropped onto the woodwork and wide. 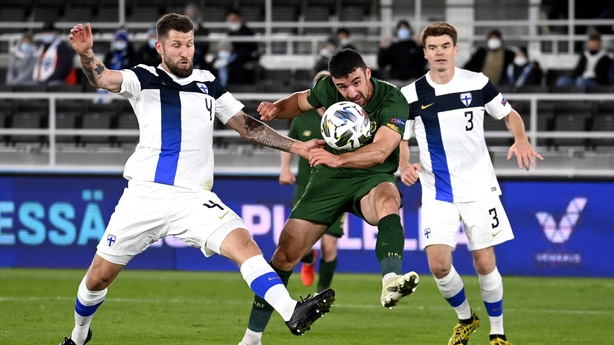 A minute later, Doherty really should have hit the target as another push forward allowed Hourihane to spot the run outside, and he rolled a delightful ball into the path of the arriving Spurs defender.

Doherty put the head down and looked to smash it, but the shot just came off the outside of his boot and sliced wide without testing the keeper.

But then in the 66th minute, Ireland handed the hosts a golden opportunity and they would not turn it down.

Randolph attempted a quick ball out of the box into the path of Doherty, who was pushing out towards the right flank, but the pass was a touch light and Pukki was alert to collect, turn and cross.

Jensen miscontrolled the ball inside the six-yard box but O’Shea’s clearing header went right back to the striker who made no mistake at the second time of asking and slammed the ball into the back of the net. 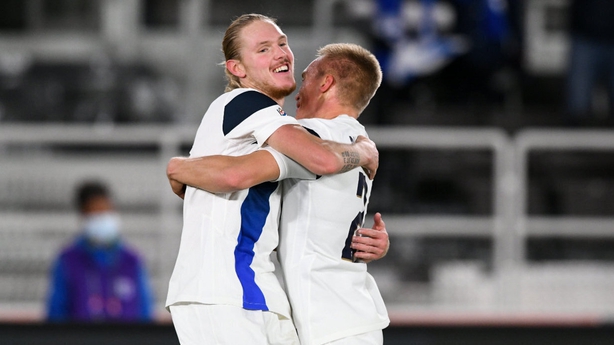 Ireland upped the tempo in search of an equaliser and had a penalty shout waved away for a handball, before the ever-lively Connolly smashed a snapshot on target in the 74th minute, but the shot was batted away by Lukas Hradecky.

Adam Idah and Ronan Curtis were sent into the Ireland attack and while a string of set-piece deliveries were sent into the box, Finland coped with them without too much trouble, until an 82nd minute corner found Duffy unmarked and only six yards out.

Uncharacteristically, however, Duffy misjudged his header and sent the ball high over the bar; a real opportunity spurned.

Set-pieces appeared to be Ireland’s only route to goal and they came closer in the 87th minute as another Brady delivery was helped goalwards by Doherty’s glancing header, however, the alert Hradecky helped it over the bar.

Then deep into injury time, Ireland best chance arrived as Brady’s ball in from the right was glanced on to the arriving Curtis at the back post.

The Portsmouth man angled a strong header down at the foot of the near post, but somehow Hradecky scooped the ball clear, saving his side who held on for the narrow victory.

A disappointing end to an eventful 10 days inside the Ireland camp, which was dominated by all thing Covid and saw their Euro 2020 dreams disappear.

Next up is a double-header for Kenny’s side in November as they line out for two more Nations League games as they travel to Wales and welcome Bulgaria to Dublin. 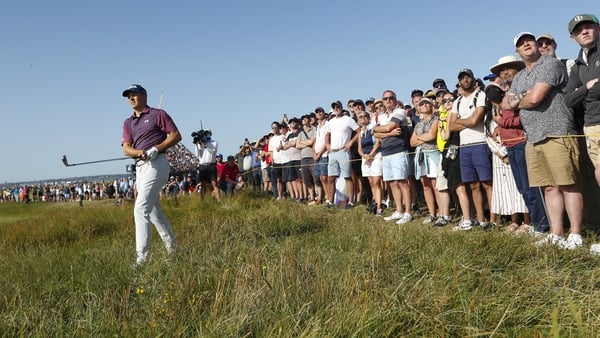 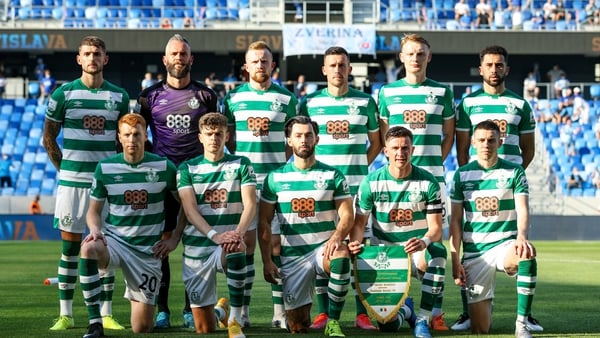 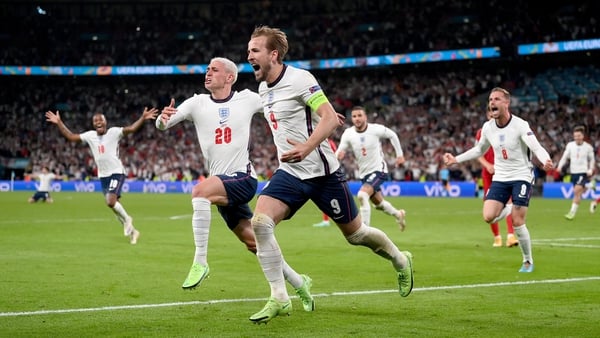 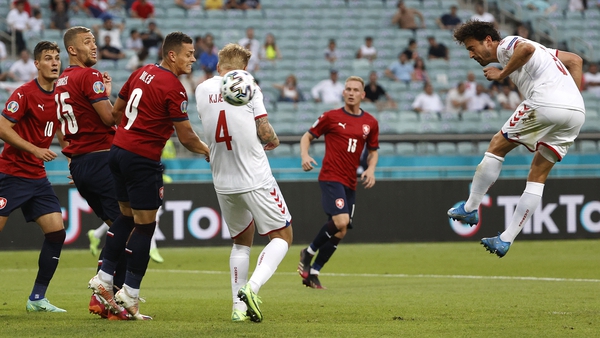