But the Italian accepts that this is a chance for this current Lilywhites squad to write itself into the history books of club soccer in Ireland.

Only twice has an Irish club reached the group stages of a European competition, with both occasions coming within the last decade.

Shamrock Rovers did it back in 2011, but failed to pick up a single point in their six Group A matches, despite some memorable moments - including taking the lead against Tottenham Hotspur at the old White Hart Lane.

Dundalk managed the feat themselves five years later. Although they too finished bottom of their group, they gave a better account of themselves, picking up four points, including a victory against Maccabi Tel Aviv at Tallaght Stadium.

From a financial point of view, progress tomorrow would be massive for the club, with a windfall in the region of €3m coming their way, even if they failed to pick up a point in the upcoming group stages.

There's no denying the importance such a sum, particularly with Rovers virtually assured of the SSE Airtricity League title, and Bohemians having picked up a neat €1.7 million from their recent transfer of Matt Doherty to Spurs.

On top of that though, Giovagnoli says it's a chance for the players to write their own chapter in Dundalk's recent storied success.

"You're going to be part of the history of the club if you get through," he tells RTÉ Sport.

"We know what we face, but still we are not to be distracted by this kind of pressure. We have to think that this pressure is a privilege to have, that makes us more focused on the task."

Michael O'Neill and Stephen Kenny were the men behind those previous squads who reached the Europa League group stages.

Both went on to manage their countries, with the latter currently preparing for a massive Euro 2020 play-off semi-final against Slovakia next week.

Giovagnoli isn't allowing a comparison to be be drawn between himself and the pair.

"We are talking about two different coaches who have a different profile than mine. I'm not even close to them - they're legends here in Ireland," he says.

In reality, he points out that a win tomorrow could give him a chance to stay longer in Co Louth.

"I want to be part of this club. I want to extend my contract. I want to work. I want to build a project - something successful for Dundalk, for the town, and for football in Ireland."

It's been a whirlwind period for Giovagnoli, taking over in the last week of August after Vinny Perth was sacked.

The club made the move ostensibly because of a heavy Champions League qualifier defeat to Celje. That result was on top of a dip in form that had seen a club that had won five of the last six Premier Division titles, sitting third in the table.

League form has improved since the Italian arrived, despite Sunday's big defeat to Shamrock Rovers, a result that can be explained away, to some extent, by the 10 changes made following last week's penalty shootout win over Sheriff Tiraspol.

"The best thing is the relationship that we've built with the players," is his answer when asked what he has most enjoyed since arriving at the club.

"We've built a family situation internally. There is a kind of trust in between us. We really enjoy working together, and it makes us strong.

"What we did in Moldova was something special. Only with this family environment could we have gone through, and faced this challenge.

"To make this more special, we will need to get through tomorrow." 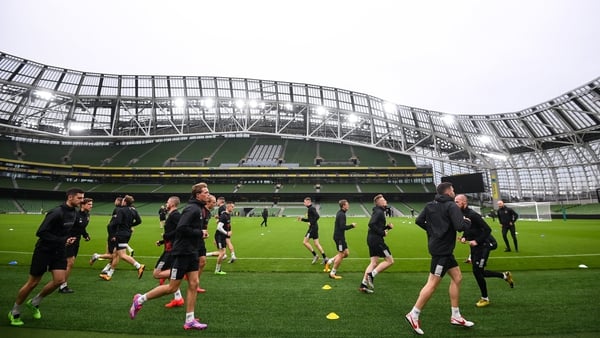 All you need to know: Dundalk v KI Klaksvik