West Ham put behind them the loss of manager David Moyes and two players before kick-off due to positive Covid-19 tests to ease past Hull 5-1.

Defender Issa Diop and Republic of Ireland midfielder Josh Cullen were initially named in the team to face the League One Tigers, but 15 minutes later the line-up was changed with both players omitted, and when the teams came out there was no sign of Moyes, with assistant Alan Irvine taking charge.

The tie went ahead as scheduled with Sebastien Haller and Andriy Yarmolenko both scoring twice and Robert Snodgrass also on target in a comfortable victory.

Snodgrass opened the scoring against his former cub when he volleyed in a cross from Yarmolenko.

Manuel Lanzini fizzed a shot narrowly wide before Haller made it 2-0 at half-time from Yarmolenko's lay-off.

Yarmolenko added the third from the penalty spot after a foul on Haller.

Although Mallik Wilks pulled one back, Haller and Yarmolenko struck again in stoppage time as West Ham earned a fourth-round trip to Everton or Fleetwood.

Newport added Watford to their long list of recent cup scalps as they reached the fourth round of the competition for the first time in their history with a 3-1 win over the Championship outfit.

Watford arrived at Rodney Parade unbeaten in their three outings this season, but conceded twice in the opening 30 minutes against the League Two outfit.

Having knocked out another Championship club - Swansea - in the opening round, their reward is another home tie next week against the winner of Wednesday night's clash between Morecambe and Newcastle.

The goalkeeper saved Grady Diangana's penalty in the shoot-out as the visitors progressed 5-4 after drawing 2-2 at The Hawthorns.

Baggies skipper Hal Robson-Kanu struck twice from the spot in the second half either side of a brilliant overhead kick from Emiliano Marcondes.

Marcus Forss - a former Baggies trainee - then scored his own penalty to force a shoot out.

Marcondes hit the post for the visitors in the first half and Conor Gallagher twice went close before the penalty drama.

The Bees booked a fourth round home tie against either Fulham or Sheffield Wednesday next week. 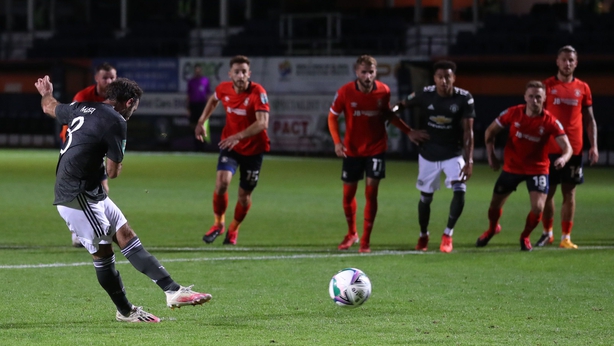 Manchester United did enough to see off Luton at Kenilworth Road but it was another laborious display from Ole Gunnar Solskjaer's side.

A Juan Mata penalty on the stroke of half-time and neat finishes from substitutes Marcus Rashford and Mason Greenwood secured a largely unspectacular 3-0 win.