West Ham manager David Moyes and two of his players were dramatically sent home from the London Stadium prior to their 5-1 Carabao Cup win over Hull after testing positive for Covid-19.

Defender Issa Diop and Republic of Ireland midfielder Josh Cullen were initially named in the team to face the League One Tigers.

But 15 minutes later the line-up was changed with both players omitted, and when the teams came out there was no sign of Moyes, with assistant Alan Irvine taking charge.

"The club's medical team were informed of the test results as the team were at London Stadium preparing for this evening's Carabao Cup third-round tie against Hull City.

"The manager and both players immediately left the stadium and have returned home.

"All three, who are asymptomatic, will now follow Public Health England and Premier League guidelines and protocols.

"Everyone at West Ham United send their best wishes to David, Issa and Josh."

West Ham went on to say their measures and protocols around Covid-19 remain stringent and that they offered to test the Hull team ahead of the fixture, but City did not accept.

It is understood West Ham's and Hull's medical departments agreed the match could go ahead, despite the positive tests, within the protocols and in consultation with the EFL's medical department, and given the evidence that suggests there is very low risk of transmission during a match outdoors.

However, with the news coming on the same day that nearby Leyton Orient had their game against Tottenham postponed due to a number of positive tests, and just as Prime Minister Boris Johnson was outlining new coronavirus restrictions including no prospect of fans returning to matches any time soon, it was not a good look.

Nevertheless, Hull said: "We are satisfied that West Ham followed all guidelines and protocols upon receiving the positive results and, after consulting with the EFL, were comfortable with the game going ahead.

"The club will continue to stringently monitor the well being of our players and staff as per Public Health England and EFL guidelines - as we have done since they were put in place - and we wish the West Ham manager and players the very best."

According to protocols Moyes, Diop and Cullen will have to isolate for 10 days, meaning they will miss Sunday's match at home to Wolves and the Carabao Cup fourth round. 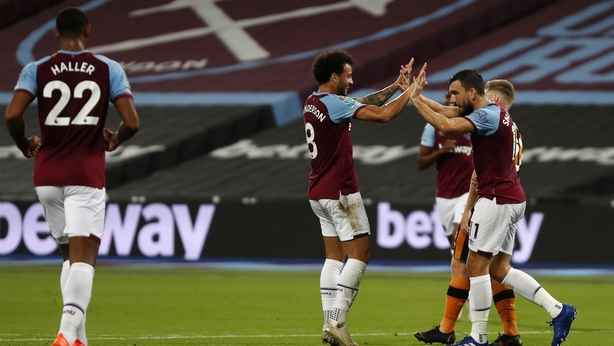 This third-round tie went ahead as scheduled with Sebastien Haller and Andriy Yarmolenko both scoring twice and Robert Snodgrass also on target in a comfortable victory.

Snodgrass opened the scoring against his former cub when he volleyed in a cross from Yarmolenko.

Manuel Lanzini fizzed a shot narrowly wide before Haller made it 2-0 at half-time from Yarmolenko's lay-off.

Yarmolenko added the third from the penalty spot after a foul on Haller.

Although Mallik Wilks pulled one back, Haller and Yarmolenko struck again in stoppage time as West Ham earned a fourth-round trip to Everton or Fleetwood.