Republic of Ireland international Callum Robinson claimed his first goal for West Brom since his permanent switch last week as the Baggies eased past Harrogate 3-0 to book their spot in the Carabao Cup third round.

The 25-year-old joined from Sheffield United last week after spending the second half of last season on loan at the Hawthorns, and came off the bench to round off the scoring after earlier goals from Rekeem Harper and Hal Robson-Kanu against the Sky Bet League Two visitors.

Dubliner Darren O'Shea was part of the starting XI against a gutsy Town side that battled well but were ultimately undone by three moments of quality from their Premier League hosts.

Simon Weaver's side made a vibrant start, determined to pin Albion back, but the hosts put them in their place with two goals in four minutes.

The Baggies had shown little attacking threat before Harper, after 18 minutes, collected a poor clearance 30 yards out. The midfielder turned away from George Thomson and Josh Falkingham before drilling a low strike into the corner.

Kamil Grosicki was then denied by Joe Cracknell before Robson-Kanu doubled the hosts' lead with his first goal in the competition for 10 years, the captain collecting Cedric Kipre's pass and afforded too much time to turn and curl a fine effort into the top corner from 25 yards.

Leeds crashed out 9-8 on penalties following a 1-1 draw at home to Yorkshire rivals Hull, who earned a trip to West Ham. 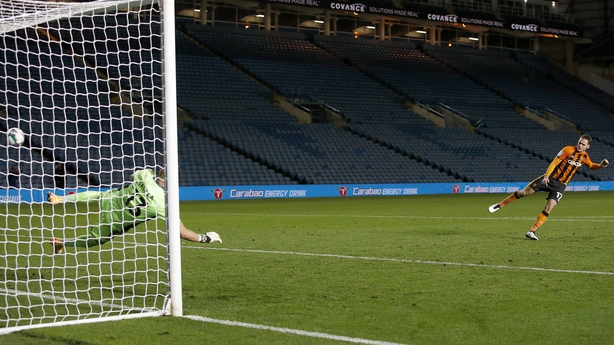 Former Cork City defender Sean McLoughlin was one of the Hull players to convert from the spot for the visitors, on a night when Jamie Shackleton saw his penalty saved before Alfie Jones stepped up to send the League One Tigers through.

Mallik Wilks had fired Hull into the lead but Ezgjan Alioski equalised at the death to take the tie to penalties.

Brentford dumped another Premier League side out in Southampton, recording a surprise 2-0 success at St Mary's despite a mini coronavirus crisis.

With some squad members forced to self-isolate, Bees boss Thomas Frank made six changes for the clash and was only able to name five of the seven permitted substitutes.

Those available responded in style as Norgaard headed home in the 40th minute and Dasilva soon slotted in a second at the end of a well-worked move.

Everton will travel to Fleetwood after easing through with a comfortable 3-0 win over League Two Salford.

Michael Keane opened the scoring with an early header from Gylfi Sigurdsson’s corner.

In the 74th minute Anthony Gordon’s low cross was swept home by Sigurdsson from six yards out, and Moise Kean’s late penalty wrapped up the scoring.

Aleksandar Mitrovic scored the only goal of the game to put Fulham through after a 1-0 victory over Ipswich at Portman Road.

Named as stand-in captain on his 26th birthday, the Serbian found the net with a powerful first-half header past goalkeeper David Cornell.