As he bid what he said was a reluctant farewell to Waterford, John Sheridan insisted he had been misquoted and had never called the League of Ireland 'a pub league'.

Former Dundalk boss Vinny Perth levelled the charge at the ex Ireland midfielder following a 2-2 draw between the teams that turned out to be Perth's last league match in charge.

Speaking to RTÉ Sport's John Kenny, after it was announced he was leaving the Blues to take up the reins at Wigan Athletic, Sheridan said: "I never ever once said it was a pub league.

"I said the players sometimes make decisions like they are playing in a pub league.

"I wouldn't disrespect it, I wouldn’t have come in the first place if I thought it was a pub league." 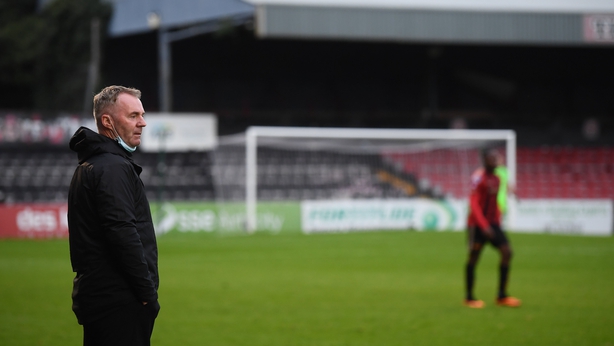 Sheridan is joining the League One club, who were relegated from the Championship after entering administration, after just eight games in charge at Waterford, but he leaves the Munster outfit well placed in third following tonight's 2-0 win at Bohemians.

"Things have just happened quickly," he said. "I got a phone call from England regarding Wigan and it's an opportunity I can't miss, to go back at a really big club.

"It's a shame but you make decisions in life and I’m in the good position that someone is offering me a job.

"Obviously, it’s difficult times, they are in administration, but it’s a job I can’t really turn down.

"Hopefully this result will push us on for Waterford first and foremost to stay in the division. That’s what I want and I’ll come back to celebrate with the players when the time is right.

"Everyone who has been involved and been around me have been magnificent people.

"I want to thank everyone involved in and around the club, who have been brilliant with me. Especially the players."

Sheridan said he hoped that the impressive performance at Dalymount would give the Waterford squad the self-belief to challenge the league's elite sides.

"The performance tonight was magnificent.

"It was a great effort with the things that have gone on in the last couple of days.

"I’m chuffed to bits with the players, it’s been absolutely brilliant since I came in.

"I want them to believe that they can compete with the Bohs, Shamrocks and Dundalks. While I was here I wanted to push that belief.

"They should be up there and that’s the belief I’m trying to get into them."