Stephen Kenny suffered his first defeat as Ireland manager as his side were beaten 1-0 by Finland in the UEFA Nations League clash at the Aviva Stadium.

The only goal of the game arrived in the 64th minute as substitute Fredrik Jensen scored with his second touch of the game just 18 seconds after coming off the bench.

There would be no heroics at the end for Ireland who, in truth, could have lost the game by more than a solitary strike, thanks to a string of saves by goalkeeper Darren Randolph.

A first home international for the new manager and barely a soul inside the 51,000-seater arena on Lansdowne Road, while outside the stadium, the usual atmospheric hustle and bustle of the street vendors, the cry of the ticket tout, and the pervading aromas of grilled burgers and vinegared chips were conspicious by their absence.

Inside the ground, the fifth floor media tribune had to be scaled via the back stairs of the former south terrace, while Covid cleansing appeared at every nook and cranny en route.

Yet to quote a famous mustachioed former Shamrock Rovers manager, "it's always the same, sometimes", the tannoy was as loud and annoying as usual in the hours ahead of kick-off.

And while the deafening levels of cheesey pop tunes are usually drowned out in that magical hour ahead of kick-off, as the temple of football fills to capacity by the gathering of the masses, just like the bang of hand-sanitiser, it remained a constant right up to kick-off.

There was a bright start from the home side as they attacked both flanks with Robbie Brady sending two decent deliveries in with pace from the left, while Adam Idah showed Leo Väisänen a clean pair of heels, skipping past him at pace down the right.

Finland responded with a trademark Daniel O'Shaughnessy long throw into the box, but it failed to threaten. 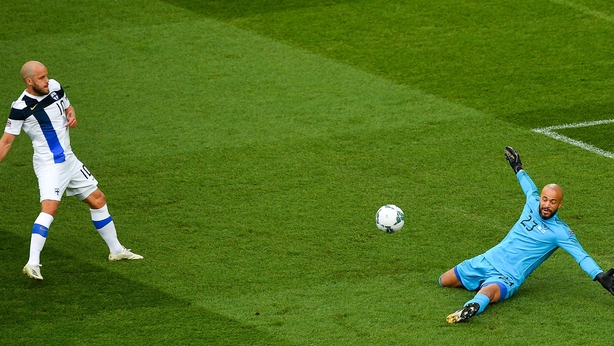 But neither keeper had a thing to do in the opening eight minutes, although Finland started to find their flow with some neat and tidy ball being sprayed about the midfield, and they were using both flanks well as they had Ireland chasing shadows.

Then the visitors almost enjoyed the perfect start, as a four-man move involving Tim Sparv, Glen Kamara, Robert Taylor and Teemu Pukki played right through the middle of the high Irish line.

Talisman Pukki, who scored ten goals in their Euro 2020 qualifying campaign, was played in on the left edge of the box with only Randolph to beat.

The normally prolific striker in such scenarios opted to place the ball past the advancing Randolph, however, the Irish keeper spread himself well and made a vital save with his left foot.

The first Ireland chance came in the 12th minute, as a move started and finished by Harry Arter ended up testing Finland keeper Lukas Hradecky.

AS IT HAPPENED: Ireland undone by Finns

The busy Irish midfielder broke up the play in midfield, which allowed Brady to burst through the middle before the ball was worked out to Callum O'Dowda, coming in from the right.

The ball was only half-cleared as it fell to the feet of the arriving Arter and his well-struck shot from outside the box stung the stopper's hands as he saved.

Finland’s next chance came from a corner in the 22nd minute as big centre-half Juhani Ojala lost his marker and got a good head on the looping ball to the back post, however, he was unable to direct the ball on target.

Three minutes later, the visitors had Ireland scrambling back towards their own goal as Rangers midfielder Glen Kamara sent a delightful defence splitting ball out to the always available Nikolai Alho bombing up the right flank.

An early delivery into the box fell kindly for target man Joel Pohjanpalo but his volley was hardly textbook and the ball ended up closer to the corner flag than Randolph’s goal.

Goalmouth chances remained a rarity, however, Ireland did have a penalty shout five minutes before the break when Shane Duffy appeared to be hauled down inside the box from a corner by Ojala.

But the referee, who barely blew his whistle in a free-flowing first half, just waved it away and kept the play moving. 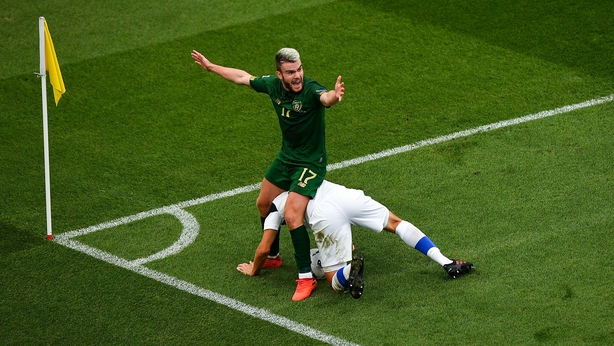 Despite the encouraging possession stats from the first half, the set-piece appeared to be Ireland’s best route to threaten the Finland goal

Two chances to lift the ball into the box inside the first five minutes were unable to test the keeper, yet it did herald a good spell of Irish pressure, offering up a great chance for Connolly in the 56th minute after Arter dispossessed Kamara and Idah’s deft touch sent the Brighton striker in on the left side of the box.

The angle narrowed, however, as the striker drifted left and then could only smash the ball into the side-netting.

O'Dowda then had a chance coming in off the right as he skipped along the edge of the box, however, his curling effort was never creeping in at the far post.

That was the Bristol City man’s last involvement as Callum Robinson came into the game in the 59th minute.

Finland followed suit in the 63rd minute as Jensen was sent into the attack, and just seconds later the new man was sliding in at the back post to hand Finland the lead, having started and finished the move.

A throw-in from the left found Jensen’s feet, before he turned well and fed Pukki who in turn laid it off to the advancing Taylor who rolled a delightful ball across the face of the goal for the substitute to turn home. 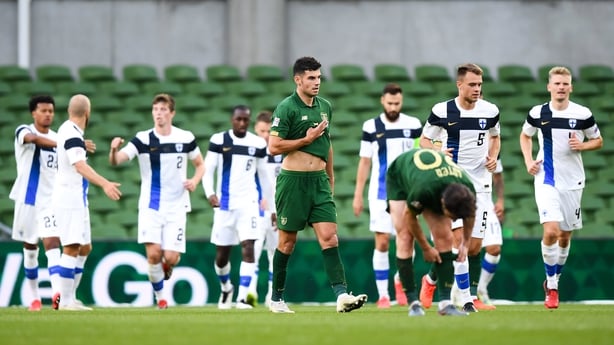 David McGoldrick was introduced in place of Idah, and it led to a good spell of Irish pressure as the side reacted well to going behind, creating three chances in succession, the best of which fell to the lively Robinson who was played through by Doherty.

With just the keeper to beat, coming in from the right, the West Brom man opted for power but the keeper spread himself well to bat the well-hit effort away.

But with this Ireland advancement, gaps started to appear at the back and Pukki brought another great save out of Randolph with a clever snap-shot from just inside the box.

Five minutes later, Randolph was in action again as he made a strong save at his near post from a Taylor effort in from the left.

Kenny called on the old guard to save his side from an opening home defeat as he sent James McClean in for the final 15 minutes, however, Finland were maintaining the momentum and almost had a second as a Pukki effort flew just wide of the post following a good move through the middle.

And things got even easier for Finland as they knocked the ball about at will inside the Ireland half with the high line long gone, the back four now resembling another era as they sat camped on the edge of their box.

Of course, Ireland rallied and an Arter effort was deflected for a corner in the 88th minute, which led to another chance courtesy of that combination of Brady delivery and Duffy header.

But there would be no repeat of the Bulgaria goal as the Derry man’s header just cleared the wrong side of the crossbar.

Four minutes of added time came and went with McGoldrick's placed effort the best Ireland could muster, but it was not enough to level matters in a game which the best team won. 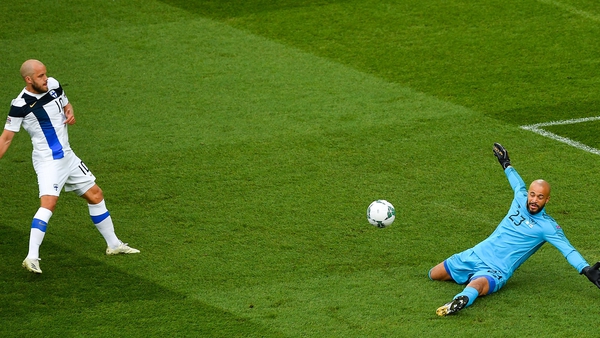 Ireland player ratings: Randolph the standout in a flat display