"A huge honour, the ultimate honour" said new Ireland manager Stephen Kenny when asked how he felt after his first match in charge of the Republic of Ireland ended as a 1-1 draw with Bulgaria.

Yet there appeared a sense of disappointment from the new man in charge as Ireland needed a late injury-time equaliser to snatch a point in their opening Nations League B clash at the Vasil Levski Stadium, Sofia.

Ireland went to Bulgaria with the promise of attacking and entertaining football from the new man at the helm, and while Kenny’s side enjoyed good possession, a lack of creativity led to a dearth of chances in the first competitive game since the Covid crisis called a halt to international football.

Kenny’s side did enjoy the better play in the first half and had chances to take the lead against the hosts, but they ended up chasing the game inside the final 30 minutes as Bulgaria took the lead thanks to a well-worked Bozhidar Kraev second-half strike.

And Ireland’s defence was breached on more than one occasion as their high line allowed the home side to exploit the space in behind.

Bulgaria, likewise, lacked the quality to take all three points, with the 1-1 final scoreline probably a fair reflection of the night’s endeavours in the national stadium.

"It’s a game we would have liked to win. We had good passages of play in the game and we created some good chances," said Kenny after the game, looking for the positives from the performance.

"But also Bulgaria did catch us on the counter-attack and had some chances also, and we will need to improve in some areas," added the ever-honest manager. 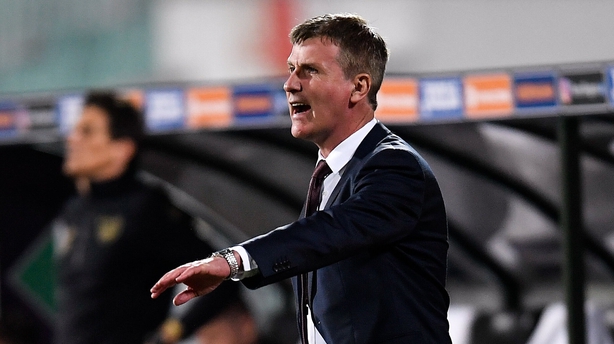 Kenny was not looking for excuses after the game but could rightly point out the lack of time he has had to work with his new charges, while he also noted a remarkable improvement in the organisation of Bulgaria, who proved a bit of a soft touch in their recent Euro 2020 qualifying campaign.

"We’ve only had three days preparation and Bulgaria are very compact defensively," said Kenny, speaking to Sky Sports after the game.

While the manager is looking to change the style and attitude of the Ireland team ahead of next month’s Euro 2020 play-off against Slovakia, he always maintained that he would endeavour to hold onto the best attributes of this Ireland side, one of which being their never-say-die attitude.

It was that fighting spirit, coupled with the constant threat from set-pieces, that dug Ireland out of a hole in Bulgaria - Shane Duffy's equalising header coming from an injury-time Robbie Brady corner-kick.

"We had a lot of the play and we never surrendered the belief and we kept doing the right things," said Kenny.

"We deserved the equaliser and we would never have deserved to lose that game. Absolutely not.

"That’s our first goal from a corner since Daryl Murphy in 2017 and we were conscious of that, and it was just a brilliant header from Shane Duffy.

"Robbie Brady showed terrific attitude to close down the Bulgarian defender, force the corner, take the corner and put the requisite flight that was needed for Shane. He still had a lot of work to do but he buried it and it was a great finish from him."

As well as attempting to change the style of play, Kenny also named a new-look side for his first competitive game and he believed that his front three of Adam Idah, Aaron Connolly and Callum O’Dowda all performed well throughout.

"Individually, they all did quite well, and there was some really good individual play from Callum O’Dowda and Aaron Connolly," said Kenny.

"Aaron could have had a hat-trick on another night. He is a real goalscoring threat and you want players in wide areas contributing. 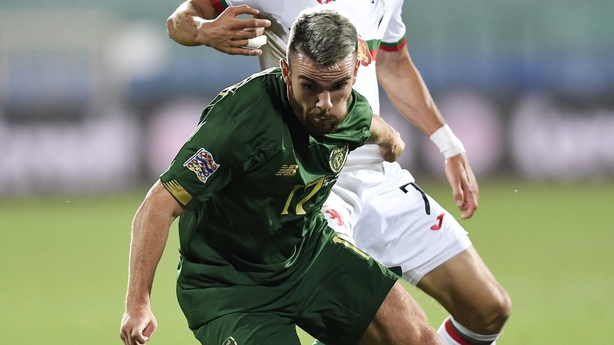 "Adam had a tough job coming in at centre-forward and I thought he acquitted himself very well.

Reflecting on his first game in charge, Kenny admitted that the empty stadium added to the strange nature of the trip to Sofia, while he also felt that the late goal would help his side take the momentum into Sunday’s clash with Finland.

"Because it was our first game since last November, I haven’t experienced a match with no crowds, so it was quite surreal, I must admit," said Kenny.

"But it was just a huge privilege, a huge honour to manage your country, no greater honour, the ultimate honour.

"We wanted to win the game, but we got a late draw so one point is something, and we have to take that into the game on Sunday, as there is a quick turnaround and we have to try to get a victory against Finland."