Harps scored twice in the last three minutes to snatch a dramatic 3-2 win against Waterford at the RSC on Sunday afternoon and lift themselves above bottom side Cork City on goal difference.

"We're always fighting at the bottom, be it the relegation play-off which is usually where we are... we'd take that with open arms at the moment.

"I'd say Waterford will be very disappointed. I saw them on Tuesday [against Sligo], they conceded in the last minute as well.

"To be fair to them they responded when we equalised but that's the way it goes. We've got to worry about ourselves, stay in touching distance and stay fighting."

In this truncated Premier Division campaign every single point is crucial, at the top and the bottom.

Harps had lost their four previous games going into their clash with John Sheridan's Blues but they dug their heels in to nick a massive win.

"We were lucky to be only one down [at half-time] to be fair," Horgan added.

"But maybe we got the little bit of luck in the second half that maybe didn't go our way up to now.

"I'm not saying we've been unlucky to lose games, but just the little bit of the rub of the green probably didn't go our way that eventually did today.

"We'd have been very disappointed with the concession of that [second goal], and thankfully we responded to it. 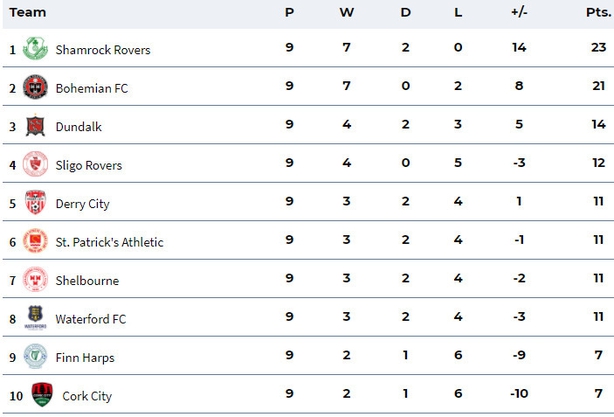 "Probably a draw would have been a fair result but then again we should have draws maybe in the last couple of weeks that we didn't get so we move on. We'd a hell of a battle, but at least we're hanging in there to battle.

"We'll take the good with the bad. We got a result here today, we've a cup game next weekend and we move on to that.  We don't get too carried away if we win - which isn't too often! - and we don't get too despondent when we lose, which is maybe more often."

When asked about his side's direct style of play at times, Horgan joked: "We tried to play the beautiful game - I don't know what game you were watching!"