Áine O'Gorman says it feels as though she's never been away, after returning to training this week with the Republic of Ireland.

The Wicklow-woman came out of retirement last month as the Girls in Green prepare for crucial upcoming Euro 2021 qualifiers with Greece and Montenegro.

She had previously won 100 caps for her country, scoring 13 goals, before hanging up her boots in September 2018.

But she tells RTÉ Soccer correspondent Tony O'Donoghue that she's raring to go.

"It feels like I never, to be honest," she said.

"It's a great environment to be in. Training has been good, and it's a really positive atmosphere.

"It's always been something that's been in the back of my mind since the new management came in. You get itchy feet. There's obviously been a few injuries in the squad as well.

"Vera gave me the shout, and I was delighted with the opportunity. I think it would be something I'd regret if I turned it down.

"It'll be amazing, probably even more special than my first cap or my 100th cap, so I'm just looking forward to the game and helping the team."

Ireland are battling for second place in Group I, with Germany already in a commanding position at the top of the table.

Vera Pauw's charges looked to be heading for a crucial away win against Greece the last day, but Anastasia Spyridonidou popped up with an equaliser deep into second-half stoppage time in Athens.

With second seeds Ukraine having made a poor start, a top-two finish, and at least a play-off place, is within Ireland's grasp.

O'Gorman, having worked as an RTÉ soccer pundit since her retirement, has been impressed with the team's campaign so far.

"It's been great, and in particular the Ukraine game was really good quality," she added.

"The way the girls attacked and pressed, and got the result in the end. It's the same with the Greece game, but there was a bit of a sucker punch with the nature of the way we conceded late on in the game.

"We'll be looking to put that right on Thursday."

O'Gorman has been included in the squad as a defender, where she previously would have been a forward.

Another thing that has changed since she received her first cap back in 2006 is the number of Ireland internationals playing aboard.

The Peamount United player was one of just six in Pauw's original squad of 26 to be plying their trade in the Women's National League.

But O'Gorman says that the numbers playing abroad are a boost the the squad.

"It's great that a lot of the girls are playing in full-time environments.

"We're playing at home in the Women's National League. It's an amatuer league, but we still have a very professional attitude.

"There's loads of places up for grabs and it's just up to us, day-in and day-out in training, to fight for our position.

"It's a position I'm familiar playing with before in the international set-up."

You can also watch the Republic of Ireland's qualifier against Montenegro on Tuesday 11 March on RTÉ2 and the RTÉ Player from 2:30pm 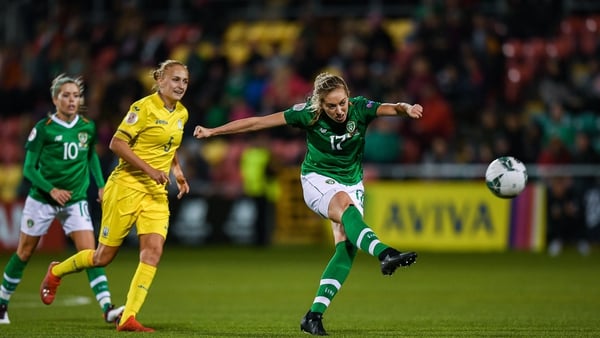