The 2-0 victory ended a run of three successive Premier League defeats for Villa, while Bruce lamented the fact his side barely turned up against a club from which he was sacked just under 14 months ago after two years in charge.

"All that's gone," said Bruce when asked about his return. "I had a couple of really enjoyable years here. It's a big club, with big support and a big history.

"The disappointment for me, after playing so well of late, in the first half in particular, we were passive in everything we did. We didn't do enough with the ball, and most certainly without it.

"Up until the goal, the free-kick, there was nothing in the game. But then Conor, with two pieces of magic, which we all know he is capable of, has scored a great goal and then played in a great ball for the other."

Smith was naturally delighted with the performance that has hauled his side four points clear of the bottom three. 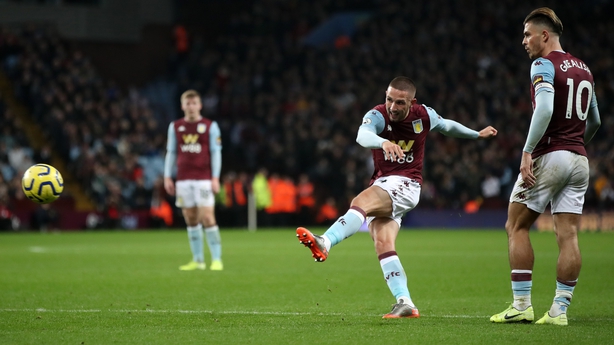 He said: "It was a good performance, especially in the first half. We controlled the ball really well, dominated possession.

"We were pretty relentless with the ball, but patient as well because they banked in and made it difficult.

"If you keep chasing the ball then players get frustrated. I told my players to be patient, move at a good tempo and we ended up winning two free-kicks around their box.

"With Conor's wand of a left foot he ends up scoring one and makes another, so I'm really pleased."

It was Hourihane's first start since 19 October as he was dropped for a 3-0 defeat at Manchester City despite his strong display in the previous game, a 2-1 home win over Brighton.

Smith added: "He's got a goal threat. He wasn't happy when I left him out of the game at Manchester City. I understand why but it's a squad game and I have hard decisions to make.

"I knew we would spend an awful lot of that game defending, and for this game I knew we would have a lot of the ball. He's answered me in the best way, so I'm really pleased for him."

Villa, though, were sparked by the all-action display of captain Jack Grealish, returning after a four-week absence with a calf injury and the player who won the free-kicks from which Hourihane weaved his magic.

"He's a constant threat," said Smith. "He moves around the pitch really well, gets into positions where players don't want to come and tackle him.

"They get frustrated, and as we saw, he won two free-kicks and it ended up with us getting two goals."