Aston Villa's Conor Hourihane scored one goal and set up another after a couple of clever free-kicks that saw the hosts beat Newcastle United 2-0 in a dominant performance to give themselves some breathing space above the relegation zone.

Ireland midfielder Hourihane put Villa ahead in the 32nd minute, tapping a dead ball to Jack Grealish and then unleashing a thumping shot which flummoxed goalkeeper Martin Dubravka.

Villa soon earned another dangerous set piece and Hourihane again assumed responsibility, firing the ball into the heart of the penalty area where Anwar El Ghazi arrived to knock the ball into the roof of the net from close range in the 36th.

El Ghazi stuck the ball into the net again later in the half but his effort was ruled offside, while Newcastle's only chance in an unambitious 45 minutes was a Federico Fernandez header which was well saved by Tom Heaton.

Ireland fans will hope Hourihane's feats are a good omen - he'll likely come up against Slovakia's Dubravka again in March when the countries meet in the Euro 2020 play-off semi-final.

Little had been created by either side in the opening half-hour, with El Ghazi a yard shy of a toe poke onto a piercing low ball into the six-yard box from Matt Targett, while Martin Dubravka produced a stunning fingertip save to deny Douglas Luiz's fizzing 22-yard right-foot curler.

Left-back Targett was the victim of a bizarre 20th-minute incident when he vomited on the pitch just after he had taken a throw-in - but after treatment and water the £15.6million summer signing from Southampton was able to continue.

Although Villa were always the more threatening side, with the Magpies primarily reliant on the counter-attack, it required two set-piece situations to prise open the visitors. 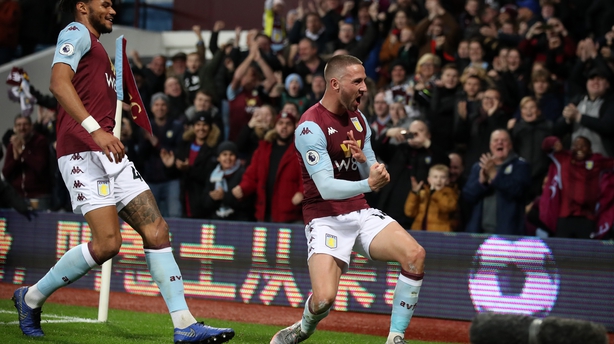 The first arrived in the 32nd minute as Grealish raced onto a raking through ball, only for the attacking midfielder to be blatantly pushed in the back by the covering DeAndre Yedlin a yard outside the area.

It was prime territory for Hourihane, whose first touch was a tap pass to Grealish who in turn stopped the ball dead. The Republic of Ireland international sumptuously whipped around the wall, and the poorly-positioned Dubravka, for his fifth goal of the season.

Four minutes later Villa doubled their lead, with Grealish again drawing a foul, although it appeared as if he had deliberately caught the outstretched leg of Federico Fernandez.

On this occasion, Hourihane curled a piercing low ball into the six-yard box, and with Newcastle's defence leaden-footed, El Ghazi easily stabbed home his fourth goal of the season from three yards.

It prompted cries from the Villa fans of 'Brucey, Brucey what's the score?' as the home faithful teased their former boss.

Villa, though, were then indebted to Tom Heaton for preserving their two-goal cushion just before and after the break. First he pushed away a downward header from Fernandez, before tipping beyond the post a corner-of-the-net-bound 20-yard strike from Allan Saint-Maximin.

Dubravka responded in the 53rd minute with a brilliant save of his own as his defence again went missing, pushing away a six-yard header from an unmarked Ezri Konsa onto an inswinging Grealish corner.

In the 77th minute, Dubravka again denied Villa a third, saving from Wesley at point-blank range after another low ball had been played into the six-yard box, this time from Targett.

Despite Bruce playing all three substitutes, including strikers Andy Carroll and Dwight Gayle, his side were unable to find a way back into the game.