It's just over 30 years to the day since John Aldridge sent the Republic of Ireland to Italia '90.

The Liverpool-born striker scored twice in a 2-0 win in Malta on 15 November, 1989 to send the Boys in Green to their first ever World Cup.

Glory days, and memories that are still fresh in Aldridge's memory.

He played in three major tournaments for Ireland - Euro '88 and the World Cups in 1990 and '94 - so he knows how difficult, and how special, it is to make them.

Tomorrow night he'll be at the Aviva Stadium for Ireland's Euro 2020 showdown with Denmark desperately hoping to witness another famous win.

"I'm looking forward to being at the game. I think the crowd can really play a part. The Lansdowne roar when we played was brilliant, fantastic. The fans need to do that from the first minute. Let's hope our fans come to the game and be the 12th man." 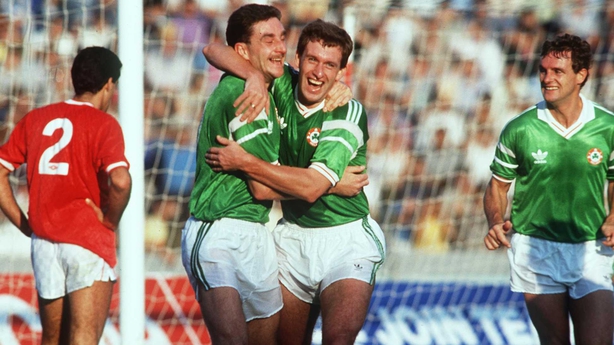 Aldridge soldiered alongside Mick McCarthy as a player and expects his old team-mate to have a clear plan to combat the visitors, who hammered Ireland 5-1 in a World Cup play-off two years ago.

The former Real Sociedad player said: "You can't let your heart rule your head in these games. It's a fantastic opportunity, not just to get to the Euros next year, but they can get that monkey off their back.

"How did we all feel when the Danes came a couple of years ago and absolutely battered us? It was cruel to watch in the end. That must of hurt the lads so much. This is a fantastic opportunity to get them back, it really is.

"Obviously Mick will have to have the right tactics. Christian Eriksen isn't having a great season (at Spurs) but he seems to turn it on for his country. He's a really big instigator, they have to stop him.

"But Mick will be aware of that. He'll let the lads do the rest and counsel themselves from that heavy defeat two years ago.

Aldridge conceded that Ireland are badly missing a natural goalscorer since Robbie Keane hung up his boots, though one young Dubliner could be sprung from the bench as a last throw of the dice.

"You don't want to put him under too much pressure," Aldridge said of 17-year-old Troy Parrott, who made his senior debut in last Thursday's 3-1 defeat of New Zealand.

"He's the one we're all hoping can be the next Robbie Keane. He's very gifted. Young lads can come in and do wonders because they're not scared of anything. Who knows?

"We haven't had anyone prolific (since Robbie Keane retired). There's a few good young lads coming through, a couple doing well at the moment. Hopefully one of them will fit the bill in years to come because if you want to qualify for these tournaments... you have to have goalscorers."

As for a prediction, Aldridge was cautiously optimistic, and had one simple message for the fans: "Trust Mick. He's been there, done that. He knows what's in his head."