Christian Eriksen believes Troy Parrott has some traits in common with Harry Kane but that the young Ireland striker "has a lot to learn".

Parrott, 17, is in the Ireland squad for tomorrow night's crucial clash with Denmark, with the Boys in Green needing a win to qualify for Euro 2020.

The young Dubliner has made one senior appearance for both club and country (against New Zealand last Thursday) but has been touted as a star of the future.

Tottenham manager Mauricio Pochettino has even included the former Belvedere FC forward in his Champions League squad where he sits behind England captain Harry Kane, Son Heung-min and Lucas in the pecking order.

Denmark midfielder Eriksen, who remains a Spurs player after failing to engineer a move away during the summer, has been impressed with what he has seen of Parrott but was calm in his assessment.

"If he’s going to beat Harry Kane [for a starting spot with Spurs] then it’s going to be tough," Eriksen said.

"But, no, he’s done very well. He’s trained with us for a while now and he played a few games in the pre-season.

"He’s a good player. I wouldn’t say it’s fair to say he’s like Harry Kane, he’s obviously not but he has similar [traits].

"He’s good on the ball, good finishing and makes some good runs.

"He’s still young so he has a lot to learn but he’s a good lad." 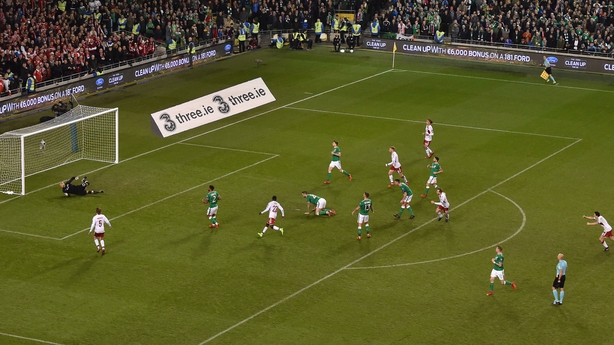 Eriksen has fond memories of playing at the Aviva Stadium after bagging a hat-trick when Denmark stuffed Ireland 5-1 in the World Cup play-off in 2017 (above).

However, the 27-year-old doesn’t expect to get the same space tomorrow evening (7.45pm) when a draw will suffice for Åge Hareide’s side.

"I think it will be a completely different game from back then," he said.

"We got a very good result and the game changed at half-time because they changed a few players for the second half, which created even more options for us in midfield so it was a more open game but I think tomorrow will be less open that that game was.

"We know Ireland needs to win but we also want to win."