Republic of Ireland manager Vera Pauw said her team were too slow to react to a "streetwise" Greek outfit in Monday's 1-1 draw in Athens.

Amber Barrett's early goal looked like it was going to enough to maintain Ireland's perfect start to their Euro 2021 qualifying campaign, but the Girls in Green couldn't hold on as Anastasia Spyridonidou hit the equaliser deep into second-half stoppage time.

The result keeps Pauw's side in second place in Group I, but it damages their chances of picking up one of the automatic qualifying places available to the three best runners-up.

"They moved players up, and they were just so sharp in their tackles, and just streetwise," Pauw told RTÉ Sport's Tony O'Donoghue afterwards.

"We have to learn from that, because we've given it away ourselves. We haven't been in the game at all.

"The first-half, a little bit. Early in the second-half also, we could have scored, but we didn't. A bunch of street fighters made it so difficult for us that we couldn't get our play."

Ireland manager Vera Pauw admits that Ireland have to learn from Greece and become most 'streetwise' if they want to qualify for Euro 2021. #rtesoccer #GREIRL #20x20 pic.twitter.com/FWRSuLXg3b

The visitors started brightly at the Nea Smyrni Stadium, and looked comfortable before the break. As the game wore on though, Greece began to gain a foothold.

Ireland were hanging on before they finally conceded the equaliser, and Pauw says her squad depth was tested.

"Without blaming anyone, you lose a lot of quality if you have so many injuries," she said.

"I thought we had enough qualities on the pitch still, but we need to learn how to put the game away. That is by listening very, very carefully when things are changing.

"At the end they played with five strikers, so you have to react, and you need to do that very sharply.

"Everybody has fought their butt off, and done everything they could, but it needs to be better. We need to learn to dominate the game." 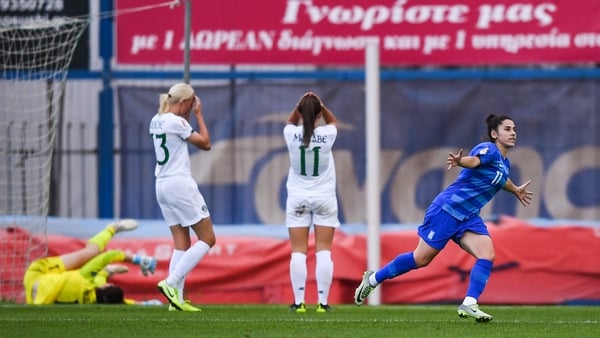