The Republic of Ireland missed the chance to go top of their UEFA Women's Euro 2021 group with Germany after conceding a stoppage-time equaliser against Greece this afternoon.

Amber Barrett’s second international goal on 13 minutes put Ireland in command at the Nea Smyrni Stadium, but a litany of missed chances eventually cost them dear.

Substitute Anastasia Spyridonidou grabbed a point for the hosts, putting a dent in Ireland’s ambitions of progressing to the finals as one of the best runners-up.

They have seven points from nine and are next in action away to Montenegro in March.

Already deprived of three players from last month's victory over Ukraine, knocks to a couple of others further influenced the selection criteria of Vera Pauw.

According to Pauw, November is the month of epidemia for injuries in the women’s game. Keeva Keenan and Rianna Jarrett were both considered doubtful enough not to be risked from the start, opening up gaps for others to come in from the cold.

The Ireland captain was known as a raiding right winger under Colin Bell, but her experience of operating in the left-back role at Arsenal prompted Pauw to deploy her there in place of the injured Megan Campbell.

She was still afforded licence to attack and played a central role in the breakthrough goal, lofting a cross into the box.

Denise O’Sullivan was nearest to the ball but allowed it bounce over her head and that of defender Danai-Eleni Sidiri as Barrett rushed in behind. Spotting goalkeeper Anthi Papakonstantinou off her line, the FC Koln striker lobbed the static goalkeeper with a first-time volley.

That should have been the cue for Ireland to cement a dominant first-half performance with more goals.

Seven minutes later, Barrett was again left unmarked but her low centre had too much pace for Kiernan to get more than her studs on.

The two centre-backs also got sights of goal. Louise Quinn sliced a shot over before Diane Caldwell was off-target with a better chance when the shaky home defence were again unhinged.

Another chance was squandered in first-half injury time after Barrett picked out Niamh Fahey darting from the halfway line, but the Liverpool midfielder couldn’t keep her shot down.

During the entire first half, Marie Hourihan in the Ireland goal was only worked once. Christina Kokoviadou got between the Irish centre-backs two minutes before the interval and her low shot had to be parried away by the stopper. A last-ditch block by Julieann Russell from Athanasia Moraitou’s close-range shot was also required to keep the Greeks at bay.

Australia-based Russell, on a harsh yellow card, was replaced by Keenan at the break, while Barrett switched roles with Kiernan to allow the latter to operate as the sole striker.

O’Sullivan fashioned Ireland’s best opportunity to kill off the game five minutes after the restart. Excellent play from Whelan slipped in the Cork native, but she couldn’t find the accuracy, allowing Papakonstantinou to bat away the strike.

In another flowing move, Kiernan miscontrolled O’Sullivan’s through ball and the Greeks finally came alive in the final 20 minutes.

Moraitou floated an 80th minute shot over the crossbar and, into injury time, Caldwell needed to deflect Veatriki Sarri’s shot out for a corner.

The late pressure finally told when McCabe was left at the back post marking two players, with Spiridonidouone beating Hourihan with a rising volley inside her near post. 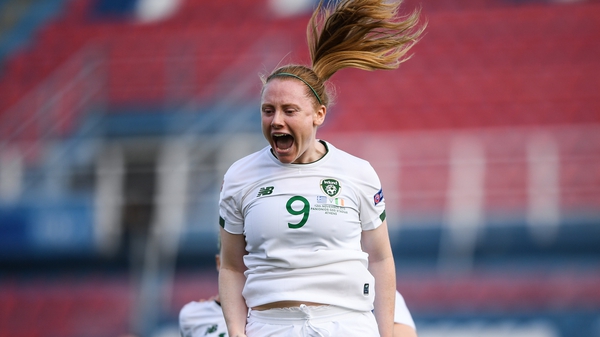