Dundalk will aim to seal the final trophy of the season as the Unite the Union Champions Cup comes to a conclusion at Oriel Park tonight, live on RTÉ2.

The first leg of the inaugural competition finished 1-1 as Daniel Kelly cancelled out Shane Lavery's strike at Windsor Park.

Penalties will be used if the tie finishes level after 90 minutes for the game which kicks off at 7:05pm.

Kelly admitted that the Lilywhites took time to get to grips with Linfield's style on Friday.

"We were a bit slow to start perhaps and it took us a little while to get used to how they played in the first half but after that I thought we were very good and even better in the second half. We pushed on and could have won it.

"We got the chance to equalise early in the second half and thankfully I was able to take it and we feel we could have won it and we are disappointed not to but we go into Monday with confidence after our performance.

"They are a decent side and will be up for it. "

The former Bray Wanderers and Bohemians player now has 15 goals in the calendar year.

He added: "I was happy with my finish, I want to contribute in every way that I can. I was waiting for the centre back to either bring me down or let me in and thankfully he let me in so I was able to score. I was happy with that and it was good to get on the scoresheet.

"It was important that we got level and I was happy that I was able to do that but it was a difficult game for us, we managed to get on top in the end and we are happy with how we played in the second half.

"It won't be easy because Linfield are a good side, they have a lot of quality and they will be wanting to win as well but we want to lift the trophy, we have three already and we want to get another one.

"Hopefully we can get the win and finish the season like we started and we will enjoy the break." 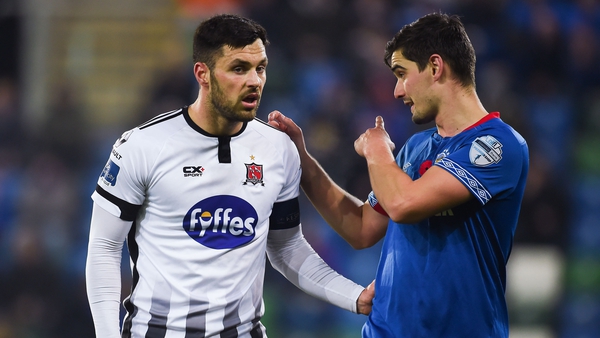