Alan Mannus does not remember much about the 2010 FAI Cup final, where Shamrock Rovers were beaten by Sligo Rovers on penalties, but the Hoops hero knew that he did not want to experience the same emotions heading into the 2019 edition on Sunday against Dundalk.

The Rovers keeper, back at his second spell at the Dublin club, recalls the feeling of despair that existed in the losing dressing room nine years ago, and once the game went to penalties, Mannus was determined not to let history repeat itself.

Mannus needn't have worried as he stood tall throughout the shootout and proved instrumental as Dundalk crashed one effort against the woodwork, before making a fine save to put the Hoops in the driving seat.

Gary O’Neill did the rest, converting his spot-kick to hand the Hoops a 4-2 victory, and Rovers duly celebrated their first Cup success in 32 years.

"The last time I played here was in 2010 for Shamrock when we got beaten on penalties by Sligo and it was difficult to take after the game in the changing room," said Mannus, speaking on the RTE Soccer Podcast.

"I don’t remember much about the game, but I remember the sense of disappointment in the changing room after, so I was determined to try to play my part in putting that right.

"But more importantly it was just about us winning the game and winning the Cup for the supporters, who have been excellent as they always are." 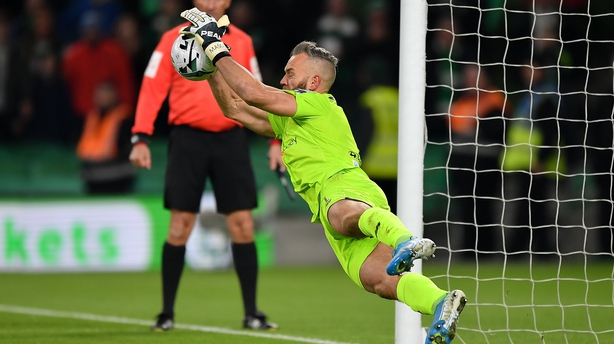 And Mannus was quick to credit goalkeeping coach Jose Ferrer, who had done his homework on Dundalk’s penalty takers, which proved vital in Rovers’ Cup success.

"I’ve been in quite a few [penalty shootouts], because I am quite old, I guess," said Mannus.

"Nothing beats experience. I have been playing first team football nearly 20 years, so I have been fortunate enough to be in Cup games that have gone to penalties and I have won a few and lost a few.

"I did a lot of homework before the game with Jose, the goalkeeping coach, on their penalty takers and I had a good idea as to where they were going.

"So a lot of credit to Jose, who has been excellent to work with, and I have never seen a goalkeeping coach put in so much time and effort into making sure he does everything he can to help his goalkeepers."

While Mannus was instrumental during the deciding shootout, the former Northern Ireland goalkeeper made a vital save in the last minute of extra-time to ensure that the Hoops remained in with a shout of winning the Cup for the first time since 1987.

It's penalties. But only because of a terrific Alan Mannus save right at the death. The tension is unbearable at the Aviva Stadium. Follow the shootout right here https://t.co/3OeMqqfxm4 #RTEsoccer pic.twitter.com/S7OmAr5AfU

"I just got my fingertips to it and thankfully I kept it out, but apart from that, I think there was a header in the first half and another that was low down which was quite comfortable," explained Mannus, who did not have a whole lot to deal with throughout 120 minutes of play.

"And I’m trying to get better about dealing with certain things mentally, but as much experience that you get, it can still be hard to deal with things, and losing on penalties can be quite difficult to take, so I am glad it didn’t happen to us."

Rovers manager Stephen Bradley said after the game that this was just the start of what was to come at the famous Dublin club, who have now won the Cup 25 times, and Mannus said that that was precisely the reason why he returned to Dublin following a spell in Scotland with St Johnstone.

"We want to get back to winning ways," said Mannus.

"I joined the club again last summer, and in my mind it was about coming to a club that was going to get back to winning ways.

"When I left in 2011, we had won the league twice and got to the final of the Cup. But this club needs winning leagues, winning cups and winning medals, and if we hadn’t won the Cup today, we would have been empty-handed, but the way we played this season we deserved success.

"Some of the football we played this year has been very good and I think we deserved a lot of credit for the way that we play.

"And the manager has been really excellent to work with, he has really impressed me as a manager, and the staff in general and the club in general, so I am happy that I can contribute to everyone’s happiness now."