Chris Lyons' late strike gave the Co Louth outfit a slender advantage ahead of Friday night’s trip to Donegal but Horgan, who was sent to the line by referee Rob Hennessy, admitted his team were lucky.

"Drogheda totally deserved to win and we have to be a hell of a lot better," he told RTÉ Sport.

Horgan was happy that his team didn’t concede a second goal, especially when defender Harry Ascroft was asked to leave the field to change his torn shorts.

"To be fair to the referee he’s a good lad," said Horgan, who was sent off for arguing about the timing of the call to make the player change his kit.

"[But] I’ve never seen a decision [like that]. Harry’s shorts were torn 10 minutes previous, there were two goal kicks, two throw-ins and he made him come off the pitch to change his shorts for a direct free kick for Drogheda.

"I’ve never seen the likes of it, crazy stuff. Thankfully it didn’t cost a goal or else it would have been 2-0 and we’d have been out, crazy, crazy decision, he’s a good referee but a moment of madness from him." 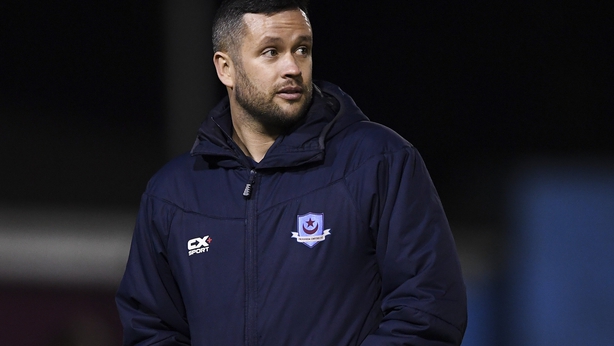 Drogs boss Tim Clancy was naturally pleased with the win that leaves them on the brink of a return to the top tier following two seasons in the First Division.

"If we are anyway below the effort level, the energy, the application, the attitude we had tonight we’re going to find it very hard on Friday," he said.

"I’m hoping we can play better. There was very little in the game. We’ve operated at a lower level this season, it’s going to be difficult.

"Scoring late on is always an ecstatic feeling, we battled really well. It’s given us a small leg up."