Mick McCarthy has revealed that Republic of Ireland goalkeeper Darren Randolph is "hopeful" he will be fit for the crunch Euro 2020 qualifier against Denmark in three weeks' time.

Randolph is currently out of action for his club Middlesbrough because of a thigh problem.

Boro boss Jonathan Woodgate said last Thursday that the stopper was a big doubt for the group's climactic clash against the Danes but McCarthy offered a more positive update on Monday.

He also played down worries about Shane Duffy and Glenn Whelan who were both left of the Brighton and Hearts teams respectively over the weekend.

"Darren is hopeful at this point in time that he will be fit to report in with the rest of the squad on the Sunday ahead of (the pre-Denmark friendly against) New Zealand," McCarthy told the FAI website.

"The Denmark match is three weeks away still and Darren is confident that he has enough time on his side to get over the injury and play for us in the game that can get us to the Euros.

"Glenn was left out of the Livingston game to rest him with Hearts playing so many games at present while I spoke to Shane (Duffy) and he missed the Everton game as a precaution.

"He got a kick on his calf in training and they felt it was better not to take a chance on involving him for that one but he says he will be fine for us." 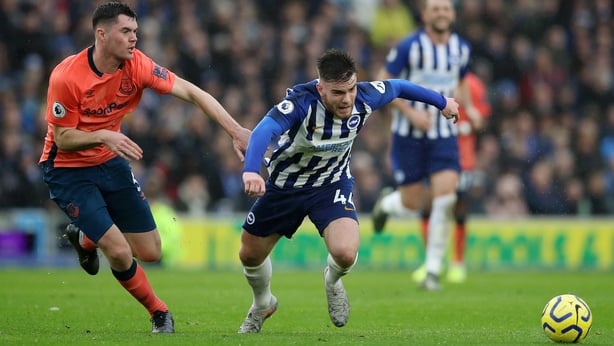 McCarthy once again talked up Troy Parrott's chances of getting a run against New Zealand and had more praise for Aaron Connolly, who continues to thrive with Brighton, starring in their 3-2 win against Everton on Saturday.

"Aaron did really well again for Brighton in a striker role," he added.

"It was the sort of game where he didn’t get a lot of the ball but everything that he did do was very good and he won the penalty for their second goal just before he went off by getting right in behind the defender.

"Like Aaron, Troy Parrott has a real chance of starting against New Zealand and like everyone else in Ireland, I am looking forward to seeing him working with the senior squad and playing at this level."