Former Republic of Ireland striker Stephen Elliott has backed Mick McCarthy's men to sink Denmark and make the Euros, but only if they truly believe they can do it.

Ireland lost 2-0 to Switzerland on Tuesday night, meaning they must win their final Group D game against the Danes in Dublin next month to automatically qualify for next summer's finals.

It's been a frustrating few days for the Boys in Green. Having turned in a turgid display in a stalemate with Georgia, they then fell to the classy Swiss, who had been beaten 1-0 by Denmark on Saturday night.

Now, it comes down to a do-or-die showdown at the Aviva Stadium on 18 November, two years and four days after Denmark thumped Ireland 5-1 in the World Cup play-off.

"We have to go in full of confidence," said Elliott, who played under McCarthy at Sunderland and Wolves.

"It's a home game against Denmark. I know they're a good team but they're not absolute world beaters. We have to go in with belief, otherwise we've no chance.

"Bar that (5-1 loss) we've had tight games against them. I know they've probably had the majority of the possession against us when we've played them, and that may be the case again, but if we can stay in the game... even the game over there we stayed in it and ended up getting the equaliser.

"If we can hold them out and stay in the game you just never know." 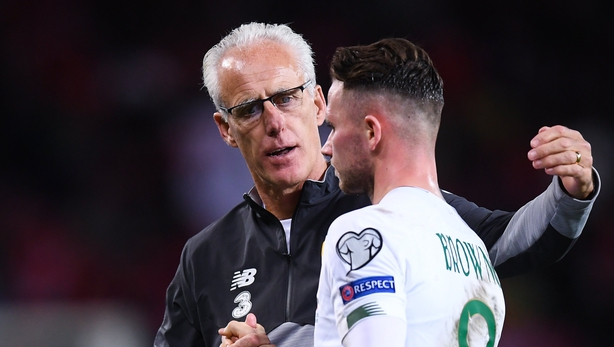 Elliott picked some positives out of the loss in Geneva. A poor first half was improved upon on the turnaround, even if the hosts ultimately ran out comfortable winners.

"Switzerland, as everybody knows, are a top quality team," he added.

"It's one of them where you're going over there and you're kind of half hoping rather than expecting. Mick has gone with the three at the back at the start of the game and, on the evening, it didn't quite work.

"They were the better team, you just have to hold your hand up sometimes, but I think in the second half there were a few positives.

"Callum O'Dowda came on and offered us a bit on the wing. He's someone who may come into the reckoning for the Denmark game.

"We never really got a foothold in the game. We probably gave them a bit too much respect."

Man of the match Darren Randolph gives his thoughts on Switzerland's 2-0 win over the Republic of Ireland in Geneva tonight. #suiirl #RTEsoccer pic.twitter.com/lAZmxk7xlW

Meanwhile, a relatively upbeat Darren Randolph is relishing the chance to take on the Danes.

Randolph was superb for Ireland at Stade de Geneve, pulling off two fine saves plus a brilliant penalty stop to keep his team in it. Ultimately, Ireland headed home empty-handed but they can still qualify their old foes next month.

"Everyone is a bit disappointed," said Randolph. "We have another chance in November to beat Denmark and go through. The Swiss, I think personally, are the best team in the group - a good side. We're disappointed but we get another go next month.

"Win the game and we're through. Roll on November."