A late Shane Duffy header helped Ireland maintain their unbeaten start to their Euro 2020 qualifying campaign as they fought back to draw 1-1 with Denmark at the Parken Stadium in Copenhagen.

The home side took control of the game in the second half and enjoyed a deserved lead in the 76th minute as substiture Pierre-Emile Hoejbjerg handed Denmark the lead.

But with just five minutes on the clock, Ireland defender Duffy’s towering header from close range secured a valuable point for Mick McCarthy’s side who remain top of Group D.

Ireland manager Mick McCarthy named an unchanged starting XI following his side’s 100 per cent start to the campaign and the intention was to play on the front foot as an attack-minded XI was sent into battle.

Denmark maintained a very familiar look to their selection with just the one change in the heart of defence from the 3-3 draw in Switzerland in March.

Denmark showed their intentions from the opening moments as Yussuf Poulsen was immediately played in down the right. Ireland left-back Enda Stevens was alert and up to the challenge, dispossessing the tricky RB Leipzig winger.

Likewise, the Irish game-plan presented itself in those early exchanges, as McCarthy’s side looked to hold onto the ball, while also playing an energetic high pressing game, attempting to throw Denmark off their natural rhythm.

An early corner for Ireland yielded little but the build-up play proved encouraging as David McGoldrick’s composure on the ball led to several players joining in the attack with captain Seamus Coleman eventually overlapping to win the set-piece.

Eriksen looked composed and attempted to thread a neat ball through the line, but the organised Irish defence stood firm to intercept and clear. 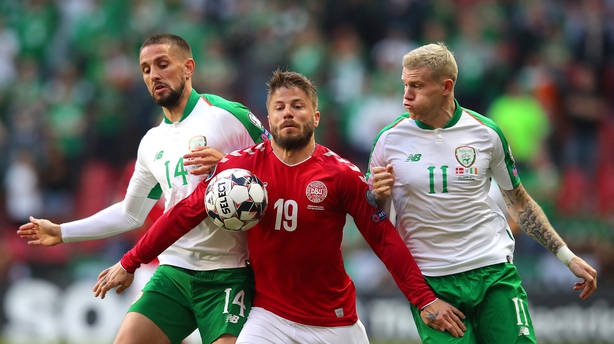 Denmark got a look at goal in the 11th minute following a soft free for a foul on Schone with Conor Hourihane proving a little over eager.

A good 35 yards out, Eriksen tried his luck, attempting to deceive the keeper with a low curling effort, and while the ball looked to be sliding wide, Randolph made sure with a standard save.

The first bit of proper quality play from the home side came in the 13th minute as a firm ball was slammed through the middle of the park into the feet of Martin Braithwaite, who had cut in from the left.

Time to turn and run at the Ireland goal, the former Middlesbrough man finally took aim but his shot was scuffed and Randolph got down well to his right to save.

Ireland slowed the tempo with some fine possession play, working the ball over and back, with both full-backs involved, yet there was no route through the Danish back line.

A clever ball from Stevens almost found McGoldrick, but the forward had just gone too early and was flagged offside.

In the 20th minute, Andreas Christiansen and Kasper Schmeichel were not on same wavelength and again there was uncertainty in defence. Ireland won a free deep inside the Denmark half moments later.

Hourihane’s left foot ball was whipped across the danger zone and Shane Duffy launched himself at the ball, acrobatically arriving at the back post.

The ball was just stopped from crossing the line by the Danish keeper who had stood his ground and got a bit lucky with the bounce of the ball. 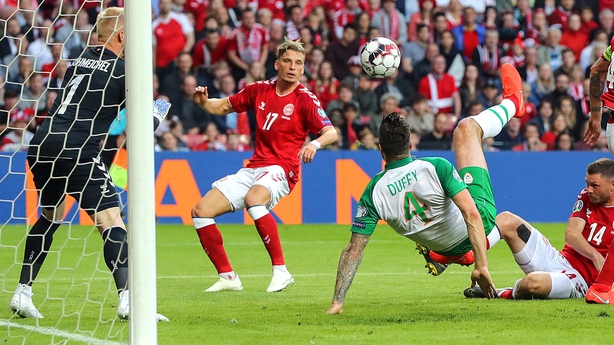 But for all Ireland’s good intentions, it was the home side who were starting to take control of the game midway through the half and two chances in two minutes put real pressure on the Irish defence.

A ball in from the right was finally cleared for a corner which resulted in Thomas Delaney almost opening the scoring with a powerful header from eight yards out.

The Danish midfielder’s effort flew just wide of the near post, and the Borussia Dortmund man took a fair smack to the side of his head in the process as McGoldrick’s foot was a touch high.

And it was a great spell for Denmark who were causing real problems on the right flank, which led to another chance for Braithwaite to get a shot on target. This time his effort was blocked, but again lacked conviction.

The quality was sporadic as the physical side of the encounter took centre stage as some hefty challenges came in from both sides with Poulsen and Glenn Whelan both feeling the effects.

As Poulsen was clattered in midfield, the play was waved on as the ball found Eriksen in space, looking to make his way into the box.

Duffy committed to the challenge and his timing proved impeccable as he dispossessed the Spurs man to thwart the danger.

Yet Denmark kept the pressure on, committing numbers forward, and Poulsen was next to find the space in between Ireland’s defence and midfield.

More time on the ball than he probably thought as the wide man snatched at his long-range effort and smashed the ball high over the bar.

The tempo dropped as the half came to a close with both sides perhaps feeling the exertions of this end of season encounter, and history looked like it was threatening to repeat itself as the sides went in scoreless at the break. 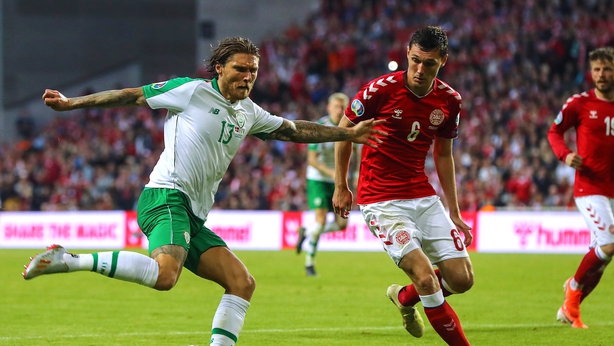 Delaney hit the first effort of the second half but again Denmark were forced to shoot from distance as another ball failed to test Darren Randolph.

And then in the 53rd minute, it looked like Poulsen would score as the tricky winger was played into the box by Nicolai Jorgensen.

The winger twisted and turned inside the area, leaving Shane Duffy on his backside but then Randolph again proved the hero for Ireland as he stayed big and made a vital save to keep the sides level.

Poulsen was starting to shine and again had the Ireland defence backpedalling.

The attacking midfielder raced thirty yards through the middle, but his run was tracked by Hourihane who got a telling block on the shot to send the ball out for another corner –almost helping it into the bottom corner of the net from the deflection.

Ireland finally pushed out of their own half and then caught the home side in possession high up the pitch.

Robbie Brady played an inch-perfect pass out to the arriving McClean who charged in on goal, albeit from a tight angle.

Options inside, the Derry man decided to go for glory but Schmeichel was alert and guarded his near post to bat the well-hit effort wide.

McGoldrick’s glancing header flew just over the bar a few moments later but in reality, it was all becoming one-way traffic as the home side really looked to increase the intensity with the Ireland defensive line sitting deeper and deeper inside their own half. 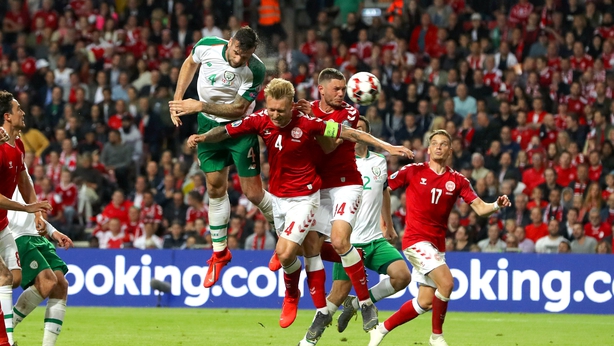 The chances kept coming as first, Eriksen shot over the bar, before Braithwaite should have done better following a brilliant lay off from Poulsen.

Jorgensen was next to prove profligate, blasting one over the bar, before Delaney should have scored, arriving late at the back post but unable to guide his close-range header on target.

Pierre Emile Hojbjerg was sent into the fray in the 73rd minute and three minutes later, the Southampton man was celebrating the opening goal of the game as his brave header handed the home side the lead.

The Southampton man timed his run perfectly into the box to guide his header past Randolph who had no chance as the substitute just got to the ball ahead of Keogh.

Scott Hogan was sent on as McCarthy sacrificed Hourihane in midfield, but it was the other substitute who would help Ireland restore parity.

Alan Judge had come on for a tiring Robbie Brady in the 67th minute and the ball-playing midfielder was taken out in mid-air to hand Ireland a free in a dangerous position with just five minutes remaining on the clock.

Judge would then deliver a perfect ball in from the right and Duffy duly obliged, rising highest in a sea of red before his towering downwards header flew into the back of the net.

Another substitution would follow as Callum Robinson was sent on to give McGoldrick a well-earned break, and perhaps McCarthy felt that Ireland could capitalise as the Danes looked deflated.

A late chance for McClean, set up by the attacking Robinson was saved by Schmeichel but the four minutes of added time could not yield any further chances on goal as Ireland escape with a valuable point. 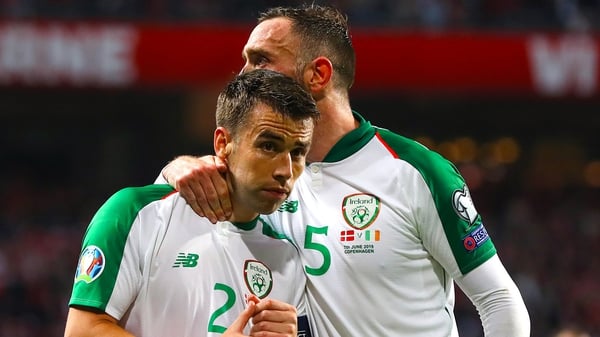