No time to dwell on Saturday's poor showing in Tbilisi as we made an early morning start, departing the Georgian capital.

From a footballing perspective, we left a disaster zone and flew straight into a war zone, politically speaking, landing in Turkey two hours later.

Granted, the pristine halls of the new airport in Istanbul is a long way away from the Syrian border, but what harm a little poetic licence to add drama following a night of none.

The world’s biggest airport indeed, and the locals were apparently still holding that Tony Cascarino-sized grudge as they changed our gate at the last minute, resulting in a 20-odd minute walk to furthest part of the airport.

Eventually evacuated, an hour and a half after the scheduled departure time, we took the three-hour flight to Geneva, where I got to finish the surprisingly enjoyable in-flight film, 'Yesterday', upon recommendation by a television colleague, who may or may not be called Tony.

A world where The Beatles don’t exist, nor Coca Cola, Oasis, cigarettes or Harry Potter.

So still in Hollywood mode, the first thing I Googled when I landed in Geneva was 'Ireland Manager'.

Alas. I jest, of course.

Welcome to Geneva, home of the United Nations, the Red Cross, the World Health Organisation, and people who are, as Harry Enfield might say, "considerably richer than you"

As welcoming visuals go, not many destinations can compete with snow-capped Alpine peaks and a glistening city centre lake.

Welcome to Geneva, home of the United Nations, the Red Cross, the World Health Organisation, and people who are, as Harry Enfield might say, "considerably richer than you".

Rumours that Mick McCarthy had spent the day out at the CERN experiment centre looking for the God particle do not appear to have any truth in them whatsoever.

One might argue that if he did find it, he would leave it on the bench.

Or completely out of the match-day squad, the Shamrock Rovers fan in me none too impressed to hear early-morning reports that classy midfielder Jack Byrne will not get a jersey tonight.

Match-day minus one, as is the hipster way of saying the day before the match, and the sun beat down in Geneva, as the vitamin D-starved travelling Paddies stripped down to the bare essentials for a good gawk around the place, all drawn down to the lakeside to admire and appreciate this beautiful city.

Even a brief glimpse is enough to appreciate the aesthetics of the city when bathed in sunshine, yet my day was mostly spent exploring the environs of Stade de Geneve, located about five kilometres south of the city.

Sun shining in Geneva & stadium getting ready for tomorrow's game. Flags are a flying... #RTEsoccer pic.twitter.com/TZqjbyGfUD

That was as good as it got for this travelling man, however, an al fresco lunch in October can never be scoffed at.

In keeping with the traditions of the city, a diplomatic approach was advised for the pre-match press conference with the Ireland manager.

Up first the Swiss, and while they came to Dublin full of confidence last month – and followed it up with a fine showing on the pitch – they appeared a lot more understated, as the home media wanted to know how they would cope with the pressure of a must-win match.

Cautiously optimistic, you sensed, but even if the Swiss are considering being cautious, it is a good sign for the Irish hopes of snatching a qualification place from under their noses. 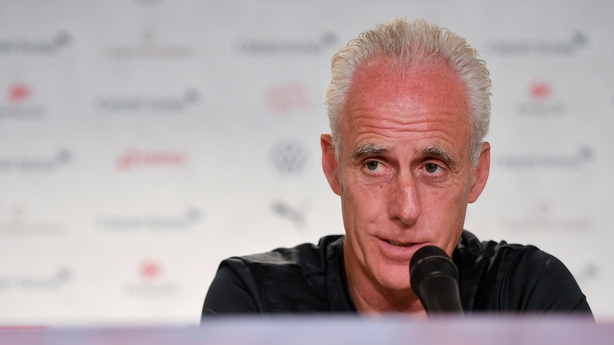 McCarthy spent the press conference doing his best to reveal as little as possible when talking about the match, his tactics and the starting eleven that he will announce an hour before kick-off.

"F the begrudgers"; the manager revealed the contents of some of the text messages that he has been getting from his friends.

"And seriously, what’s going on?" said McCarthy, wondering where all the negative vibes and comments are coming from.

"I just don’t get a feeling, the fact that we are within a win of qualifying, I just don’t get the sense there is some sense of anticipation or excitement and there should be.

"I don’t get the sense in here from you guys that we might win at all, that you might be celebrating the fact that you might have the Euros to be writing about.

Geneva is a beautiful place when the sun shines... However, it hasn't stopped raining since the early hours ahead of tonight’s match. #SUIIRL #RTEsoccer pic.twitter.com/6F8UM023EU

"It’s not a negative vibe I’m getting, it’s just not one of positivity that we can do it, which is a different feeling."

Perhaps the manager is hoping for a 'told you so' moment in Geneva tonight, and while that might help him with his preparations for the game when motivating the players, the reality is that his side have not performed to a level that might suggest that they could win the game on paper.

Of course, Ireland can win the game.

Football is, as they say, a funny old game, and the Denmark defeat of Switzerland shows how the better team does not always win.

Match-day is now upon us, and the rain has been beating down on the streets of Geneva since the early hours and has not halted as lunchtime approaches.

Rain in Geneva has made it hard to get the Stade de Geneve pitch in ideal condition.

The pitch inside the stadium looked a little scruffy around the edges last night when we got to watch 15 minutes of training, and all this water will make it quite heavy for the game.

A levelling of the playing field that can only help Ireland’s chances as they look to join the likes of Ukraine, Italy, Poland, Belgium and Russia in next summer’s showpiece.

The likelihood of it happening tonight remains a long shot, while naturally retaining the right to change opinion should the scores remain level going into the final act of what should be an attritional adventure. 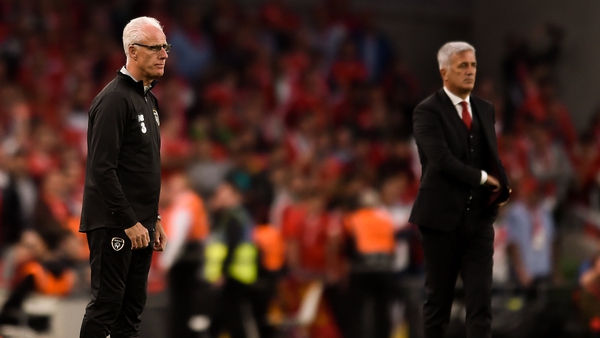 All You Need To Know: Switzerland v Ireland Soccer