Steven Gerrard rued the absence of VAR after claiming Rangers were denied a "blatant" penalty before a last-gasp Young Boys winner saw them suffer a 2-1 defeat in their Europa League clash.

After a Roger Assale strike early in the second half had cancelled out Alfredo Morelos' opener, Rangers had a strong penalty appeal waved away after Morelos was brought down in the box.

But the officials were unmoved and, soon after a sensational save from David Von Ballmoos prevented Morelos from putting Rangers 2-1 up in the 90th minute, they conceded in the third minute of stoppage time as Christian Fassnacht made the most of a James Tavernier error to send Gers home from Bern empty-handed.

All four teams in Group G now have three points after Slovan Bratislava twice came from a goal down to draw 2-2 at Sporting Braga.

Gerrard admitted his side only had themselves to blame for the goals they conceded but felt they should have been awarded a spot-kick before the added-time winner.

He said: "Football can be cruel at times. We've got ourselves to blame. I think we've gifted Young Boys a victory tonight.

"Big moments in the game have gone against us. I think if we had VAR tonight they would have had a second yellow with (Frederik) Sorensen because Alfredo gets a yellow card for exactly the same incident. So that never went for us.

"The keeper has made a world-class save at 1-1, we could have taken the lead from that.

"And we've not got a blatant penalty as well with Alfredo.

"The human eye should get that one right but the reason why VAR is coming into the game is just for situations like that so you can go back and check.

"That could have been a massive turning point. But we have to take this on the chin, it is what it is, there is no VAR so there is no point moaning about it."

There was better news for Rangers' city rivals Celtic, who are top of Group E after beating CFR Cluj 2-0 in Glasgow.

Odsonne Edouard headed the home side in front after 20 minutes and Neil Lennon's men doubled their advantage 14 minutes into the second half when Mohamed Elyounoussi fired home with the aid of a deflection.

Also in Group E, Lazio had to come from behind to avoid a home defeat to Rennes, Ciro Immobile scoring the winner in the 2-1 victory with his sixth goal in seven games. 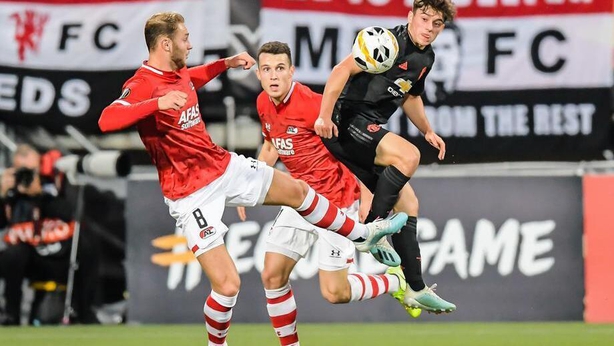 Martinelli opened the scoring when he headed home Kieran Tierney's cross and the 18-year-old Brazilian made it 2-0 just three minutes later to become the youngest player to score two or more goals in a European game for the Gunners.

Joe Willock's calm finish in the 22nd minute put the result beyond doubt and Martinelli turned provider in the second half with a superb ball across the six-yard box setting up Dani Ceballos to prod home from close range.

In contrast, Manchester United's winless run away from home in all competitions stretched to a 10th game as they were held to a 0-0 draw at AZ Alkmaar.

Ole Gunnar Solskjaer's side failed to register a shot on target in their Europa League Group L contest and lost substitute Jesse Lingard to injury in the closing minutes.

March's shock Champions League last-16 win at Paris St Germain remains the last time United triumphed away from Old Trafford and the draw leaves them second in the group on goal difference after Partizan Belgrade had earlier won 2-1 at Astana.

Wolves are third in Group K despite Willy Boly's stoppage-time goal earning them a dramatic victory over Besiktas in Istanbul.

The game looked to be heading for a goalless draw until Boly collected a ball over the top of the home defence from Ruben Neves and took a touch before turning and firing past former Liverpool goalkeeper Loris Karius.

In the other Group G tie, Feyenoord beat Porto 2-0 thanks to goals from Jens Toornstra and Rick Karsdorp.

Elsewhere, Ludogorets made it two wins from two in Group H with a 3-0 win at Ferencvaros, while Espanyol also enjoyed an away win with a 2-0 victory at CSKA Moscow.

Roma were held to a 1-1 draw at Austrian side Wolfsberger and that was also the score in the other Group J tie between Istanbul Basaksehir and Borussia Monchengladbach.