Manchester United's alarming slump continued as another poor and predictable performance saw Ole Gunnar Solskjaer's side stumble to a goalless draw at AZ Alkmaar in the Europa League.

After starting his reign with a club-record nine successive away wins in all competitions, Solskjaer's subsequent wait for a victory on the road stretched to a 10th match on ADO Den Haag's plastic pitch.

March's jaw-dropping Champions League last-16 win at Paris St Germain remains the last time United triumphed away from Old Trafford - a stage and performance that was a far cry from Thursday's tepid display against AZ.

The tired, artificial pitch in The Hague did not help Solskjaer's men in this Group L encounter, but their lack of attacking creativity and coherence was a bigger issue for the much-changed visitors.

Teenager Mason Greenwood's blocked first-half effort was the best United could manage against AZ, who would have been ahead had their finishing matched their confidence.

The Eredivisie side continued to threaten in the second period but were just unable to find a way past David De Gea as Solskjaer's team failed to build on their unconvincing opening win against Astana and provide a much-needed dollop of positivity.

Substitute Jesse Lingard, who was dropped by England earlier in the day, left with a hamstring issue to compound matters late on. 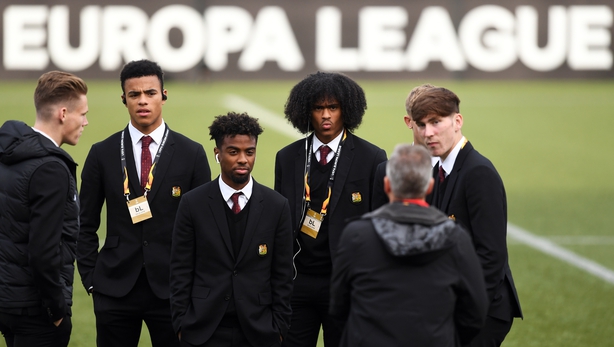 "It's time to shine" read the AZ fans' banner at the Cars Jeans Stadion, where Brandon Williams was handed his first senior start among United's eight changes.

Daniel James was deployed up front at the start - an experiment that did not last long, with 18-year-old Greenwood moved there and seeing a close-range shot blocked by former Aston Villa defender Ron Vlaar on the half-hour mark.

Angel Gomes fluffed his lines and Diogo Dalot threatened with a cross in the only other noteworthy attacking moments United could muster in a desperate first half in which their shape was poor in and out of possession.

AZ looked most likely to score throughout the opening period and found the net after just 11 minutes, only for Myron Boadu's attempt to be ruled out for offside.

Oussama Idrissi, given an inexplicable amount of room on the flank, had the space and confidence to send in a shot from the edge of the box that De Gea smartly saved at his near post.

Boadu could not get quite enough contact on a deep cross that had caught out United, who continued to stutter after half-time.

Dani De Wit was just unable to convert a low cross from the right against a tame and increasingly retreating visiting side.

Owen Wijndal forced De Gea into a save as Alkmaar upped the ante, with Idrissi fizzing across the face of goal and then testing the Spaniard.

Solskjaer brought on Marcus Rashford and Lingard in a bid to snatch a late winner, which the latter went close to after the former fired a free-kick wildly over.

Lingard limped off as United ended with 10 men and AZ deservedly took something from the game.