Fenn was at Eamonn Deacy Park to watch Galway United dump Cork City out of the second round and he's expected to take the reins on Leeside this week.

It’s been a drawn out saga that resulted in assistant boss Doyle taking charge of the clash against the Gypsies, which the First Division outfit lost on penalties.

Longford were excellent on the night, and could well have won it in normal time had Sam Verdon converted an 82nd-minute penalty. He didn’t, and after the teams exchanged goals in extra-time, it was Bohs who held their nerve in the shootout.

Afterwards, Doyle hailed the efforts of his troops following a difficult few days.

"I think everyone is well aware of what’s gone on in the week," he told RTÉ Sport’s Ed Leahy.

"Neale handed in his resignation to the club on Wednesday. I was told on Wednesday evening I’d be taking charge of training on Thursday and then the game.

"I was delighted to do so. The lads have put in some shift for me there. As regards the problems in the week with everything that’s happened, the lads have reacted great.

"There’s a great group of players in there. You could see form the performance; they gave us everything they had."

Longford are third in the table with three games of the regular season to go and though the title looks beyond them, a spot in the play-offs seems assured. 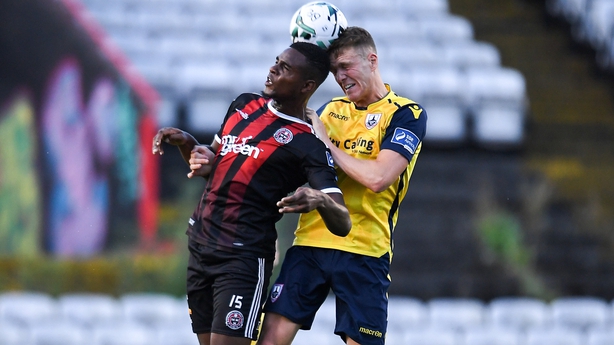 "We felt coming in we’d cause them problems. We had a number of chances and we were unlucky not to win the game.

"I’m immensely proud of the lads and looking forward to the rest of the season.

"If Sam’s penalty goes in I think that’s game over. Unfortunately it doesn’t. He showed some bravery to step up again in the penalty shootout and he put it away no problem.

"Sam was outstanding for us. On another day he could have been the hero and we’d be in the next round but it was not to be.

"I believe with the group of players we have that we can finish the league in a strong position, get into the play-offs and have a real chance of being promoted. I’d love to be the man to take them forward into that."