He might only be Bray's second-most famous sports star, but Darren Randolph is very much the established number one choice goalkeeper for Ireland.

Randolph is in a rich vein of form at the moment. He's conceded just one goal so far in the Euro 2020 qualifying campaign, and although his club Middlesbrough missed out on a promotion play-off place, he was named in the Championship team of the season.

"It's probably been my best season so far. Confidence comes with the amount of games you play, and how you play. I've played enough games now, so I know, near enough, what to expect and how to prepare.

The Boys in Green welcome minnows Gibraltar to Dublin tonight.

The hosts are big favourites, but it took a top drawer save from Randolph in the reverse fixture in March to prevent Ireland falling behind.

Just a few minutes later, Jeff Hendrick finished a slick team move, that had started with a Randolph kick-out, in the moment which defined the match.

"It was just pure reactions considering how close he was. The timing of it in the game, to go back down the other end and score a few minutes later and get the win, it looks more impressive.

"It would have been the worst case scenario. That's the tricky thing about going away to smaller countries that make it difficult. If that would have gone in, they probably would have sat behind the ball, camped out on the edge of their box, and we might not have scored.

"Luckily enough I made the save, and we scored, and got the win and made a good start."

Victory in Lansdowne Road would leave Ireland on 10 points heading into the summer break. With trips to Tbilisi and Geneva to come, as well as the visits of Switzerland and Denmark to Dublin, anything other than three points would be a massive blow to Ireland's hopes of automatic qualification.

'I hated every minute of it, it was horrible, I'm delighted to get out of it with a one-nil win' - Mick McCarthy typically honest in his analysis of his Republic of Ireland's performance against Gibraltar. #RTESoccer pic.twitter.com/euuIKoJq9u

Before the players take some well-earned time off though, Randolph says that Gibraltar showed enough in the reverse fixture to stave off any fears of complacency heading into this evening's qualifier.

"Sometimes against the lesser teams, when you're not so involved, you may have less touches of the ball, they may not get into to as many dangerous areas as the bigger nations, so it is a big concentration.

"They can be the most tiring games, when you don't have a lot to do, and you're having to concentrate.

"They're not going to come and be wide open. It'll probably be even more difficult than the first game in Gibraltar. I'm expecting them to sit behind the ball, and try and frustrate us and the crowd.

"They'll try to keep it nil-nil for as long as possible, so they can stay in the game. They'll be relying on a set piece, or a bit of skill or trickery from one of their players to nick a goal."

Darren Randolph warns Ireland that tonight's game with Gibraltar will be more difficult than the away fixture.

Watch more in an interview with @corktod as part of live coverage on @rte2. Live radio commentary on @gameon2fm. #rtesoccer pic.twitter.com/4cd2C1Mhqz

Follow Ireland v Gibraltar via our live blog on RTÉ.ie/sport and the News Now app. Watch the match live on RTÉ2 or listen to national radio commentary on RTÉ 2fm's Game On. 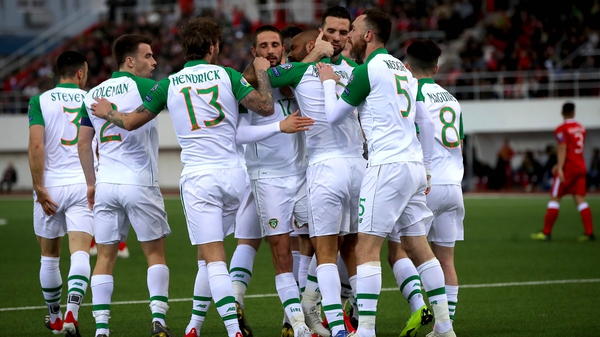 Preview: Victory the only option for group-toppers Ireland