Five games on, three campaigns later, yet the same two themes keep looping over and over; Ireland’s style of play and Denmark’s talisman.

Just over 18 months ago, and still very fresh in the memory, Denmark ransacked the Irish capital with a 5-1 mauling at the Aviva Stadium.

Christian Eriksen was the main man that November night, hitting a hat-trick in that Viking invasion, and he remains the one to watch as the two teams meet in tonight’s Euro 2020 qualifier (Live on RTÉ2, 7.45pm)at the Parken Stadium in Copenhagen.

Three scoreless draws offer a more realistic insight into how these two sides match up, with the stylish Denmark lacking substance, compared to a well-organised and hard-working Ireland lacking creativity and imagination.

So by the time they were drawn together once again there appeared to be no real appetite from either side to enthuse greatly about the prospect of another two matches.

Denmark appear confident, considering themselves a class or two above the "primitive" Irish, as Danish midfielder Thomas Delaney might ponder, while Ireland know that they can match the Scandanavian side yet remain wary of another soul-destroying defeat.

Opening Group D victories over Gibraltar and Georgia have put Ireland top of the pile in these very early days on the road to Euro 2020, and there appears to be real confidence coming out of the Irish camp, amongst the players at least.

The Ireland team’s upbeat attitude cannot be based solely on two wins against teams ranked much lower in world rankings, but rather it must come down to the regime change and the revitalised team spirit that McCarthy has nurtured over the course of the last six months. 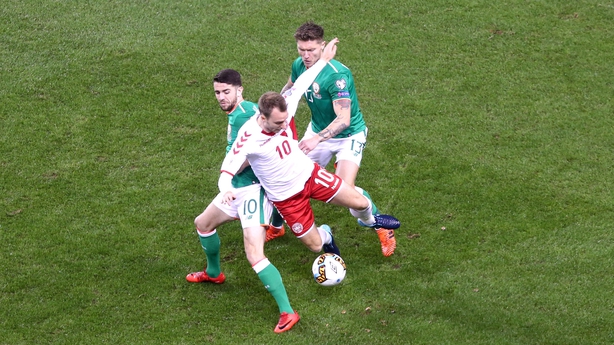 Momentum is certainly key to boosting morale, but virtually every squad member has referenced the team’s new approach and game-plan when speaking about previous encounter against Denmark.

Fitness, focus and full-on commitment is, and has always been, a pre-requisite when pulling on that green jersey, but now the team believe that all their hard work and pressure off the ball will actually allow them to go and use it once in possession.

"Ball retention is going to be vital," said McCarthy in yesterday’s press conference, and for that aspect of the manager’s tactics to prove fruitful, trust, freedom and belief must be instilled in the players.

Eriksen has given Denmark real star quality over recent years although his influence can vary, from producing a select amount of key moments to completely running the show, as was the case in the Dublin hammering.

But the Tottenham midfielder is certainly allowed to perform at his optimum, thanks to the way that Age Hareide sets up his team to accommodate Eriksen.

The midfield trio has been the key to Denmark’s relative success over the past four years, and the current candidates have really taken the team to another level.

Thomas Delaney drives them forward and his energetic, attack-minded nature needs so much attention that it naturally frees up space for Eriksen to pull the strings in the final third.

But sitting in behind is maybe the most important man in this Danish XI.

Lasse Schöne gets the team playing the Ajax way, building from the back, working the ball through the middle, while the forward thinking defenders allow the two wide front men to come inside and aid the intricate ball playing.

Denmark have struggled to get in behind the Irish defence in recent encounters – in relation to the three scoreless draws at least – and one man who did cause problems in that department, Pione Sisto, is not in the squad for this match.

Instead, Denmark will look to the ever-lively Yussuf Poulsen, who is a real handful cutting in from the right flank, loves running at players in quite an unorthodox fashion and poses an aerial threat attacking the ball late at the back post.

McCarthy has name-checked Poulsen on more than one occasion throughout the build-up to this game and the normally forward-thinking Enda Stevens will be well drilled defensively ahead of the game.

The Ireland manager said that he would not have even boarded the flight to Copenhagen had someone offered him a draw ahead of the game.

And while McCarthy’s men are talking about a new style and their winning momentum, the manager is shrewd enough to appreciate that Denmark away is a much different proposition than Georgia at home.

An away point would keep Ireland well clear of the Danes in the group and would have the added benefit of denting the hosts’ confidence moving forward in the race for one of those top two places.

Denmark may have finished their last game in style, scoring three late goals to snatch an excellent away point in Switzerland but their performance was well below their best for the 80 minutes prior to the excellent comeback.

This Denmark side has such a familiar look to the starting XI and will, no doubt, play the same way that they have been playing for the past four years, that opponents have worked out how to set up against them.

A wealth of talent is coming through to the national side, yet very few have managed to unsettle the old guard, and the plan for Euro 2020 qualification appears to be more of the same from Hareide.

Ireland travelled with a fully fit squad to Denmark, which gives the manager options to pick his preferred XI, while also having a back-up plan should things need to be shaken up during the game.

Matt Doherty appeared to concede during the week that either himself or Seamus Coleman, and not both, would play in Copenhagen, and with the Everton defender set to wear the armband tonight, it looks like another substitute role for the Wolves wing-back. 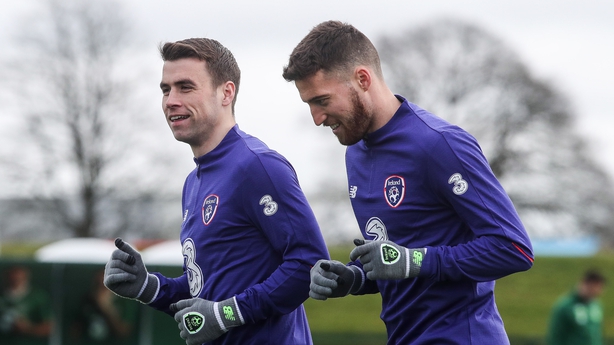 And yet the question must always be asked as to whether the manager can afford to leave a player of Doherty’s quality out of his starting XI.

Doherty’s form in the Premier League was again exceptional this season, however, the role that the Dubliner plays at Molineux is one that the Ireland manager does not utilise.

And McCarthy suggested that Doherty’s style of play would not fit into his approach, as the manager wants his wide attacking players to be strong with their backs to goal, suggesting that the Wolves man was most effective running into space.

The experiment lasted just 55 minutes in Gibraltar as McCarthy played both Doherty and Coleman, and while the manager said straight after the game that it just did not work, he did suggest that it might in matches where Ireland were being pushed back and needed an outlet on the flank.

Of course, the Denmark style could cause Ireland those exact problems, with both full-backs looking to attack the opposition half, so in theory at least, McCarthy could play Doherty on the right of the forward line knowing that he can get up and down the pitch.

In reality, however, the manager is more likely to stick with what served him well against Georgia, which would indicate that Robbie Brady will start on the right, with James McClean on the left of David McGoldrick.

Brady, of course, has had a far-from ideal season at club level and will be lacking match fitness ahead of this one. But the set-piece delivery remains a key attribute to the Dubliner’s game and should be enough to see him start the game at least.

Another player who will be chomping at the bit to get some minutes on the pitch is Callum O’Dowda, who missed out on the March double-header through injury.

The Bristol City attacking midfielder has enjoyed spells of excellent form throughout the season and was one of the players that the manager spoke highly of in the build-up to those last two qualifiers.

McClean’s place is probably most at risk in terms of O’Dowda getting a start, although the former Oxford United man has also performed well in the green jersey when picked in the middle of the park.

O’Dowda himself admitted during the week that he was lacking match fitness as a result of his injury issues, so, like Doherty, he will most likely need to perform an eye-catching cameo from the bench to be considered to start on Monday night (Gibraltar) and beyond.

Glenn Whelan found out earlier in the week that he was surplus to requirements at club level and will not join Aston Villa in the Premier League next season despite having helped to get them there.

But with such a keen focus on nullifying the number 10, Whelan can expect to be gainfully employed in the middle of the park, sitting deep in front of centre-halves Richard Keogh and Shane Duffy.

"I won’t hang around like a bad smell," said Whelan earlier this week, when speaking about playing on into his late 30s.

But the former Stoke City man is surely set to leave his scent on talisman Eriksen by full time in Copenhagen.

Verdict: Draw – but with goals this time.

Ireland are still learning the McCarthy way and will more than likely allow the home side a goalscoring chance or two while trying to play front-foot football.

McCarthy’s main attacking philosophy is to get bodies forward and into goalscoring positions, and after shipping three to Switzerland in their last outing, the Irish will know that the chances should present themselves.